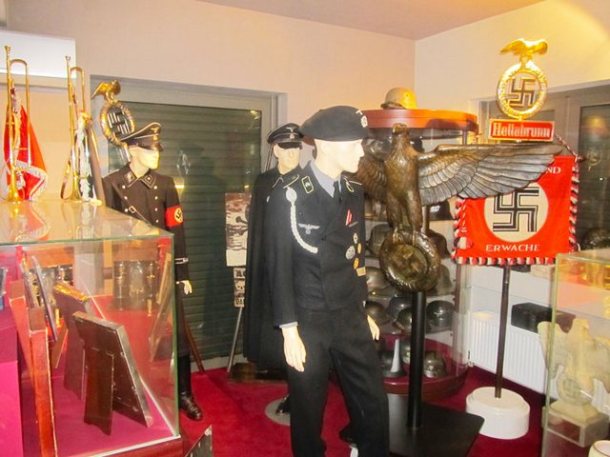 From I Can’t Relax in Greece blog (where there are more photos of Pallis’ nazi paraphernalia and illegal weapons as well):

[See pictures of the findings after the text]

New findings in the shipowner’s home in Voula – A Canadian antiaircraft gun from the 1940s was found in a container that was addressed to the wanted shipowner Anastasios Pallis. Non-operational, according to sources. The Public Prosecutor has charged the foreman of the wanted businessman, who is under investigation for the weaponry in his possession, with a felony.

The foreman was arrested during a search of the businessman’s home, who is currently wanted regarding the case of the subprime loans of the FBB bank, for which the shipowner Victoras Restis has been in custody. District attorney Charalambos Lakafosis has prosecuted the arrestee for aggravated possession of firearms, a felony charge, but also for illegal possession of firearms (misdemeanor), in tandem with his employer. The employee claims that he was under the impression that the weapons were exhibits and that they only had museum value, while he has allegedly stated that he supervised the entirety of the home and among his duties was making payments on behalf of the wanted shipowner. The Misdemeanors Prosecutor has forwarded copies of the case file to the Antiterrorism Service in order to continue the search, in all possible directions, for the discovery of any additional weaponry.

A dismantled collectible weapon from World War 2, which is non-operational, is currently located in one of the two containers in the facilities of the Piraeus Container Station and is apparently connected to the wanted businessman. According to sources, the container in question which was investigated by SDOE [Financial Crimes Department], originated in Belgium and, travelling through Malta, had arrived in Piraeus.

Bomb technicians will go to the Piraeus Container Station tomorrow in order to verify up close the exact nature of the weapon. Furthermore, in another container an old Chevrolet automobile was found, possibly also belonging to the same businessman. The container in question’s country of origin was the U.S.A.

Two written reports by the British Armed Forces veteran Pringle Stacey, addressed to the Internal Affairs Department in May and June, were the reason behind the Greek Police’s raid, yesterday afternoon, of the mansion owned by the wanted shipowner Anastasios Pallis.

With his reports the shipowner’s British ex-partner informed the “untouchables” [Police Internal Affairs] of the Greek Police that in the wanted businessman’s home in Voula lay a hidden cache of weapons that had not been located in the police’s previous investigation regarding this case.

Indeed, an echelon of the department performed a rigorous search yesterday afternoon in the shipowner’s luxurious residence as well as his mother’s apartment in Palaio Faliro. As per the official announcement, within the two homes the police discovered 21 firearms for which a hunting license had been issued! In addition, 60 knives of different types, ten optical sights and two tasers were also found.

Moreover, according to a later announcement by the Police, within the shipowner’s home a Walther 357 Magnum handgun, a Walther 9mm handgun, four Glock 9mm handguns and four Glock 0,45 handguns were discovered. For all of the above handguns, 10 in total, a firearms license had been issued.

Furthermore, the Police discovered a PAO mortar shell inside a metal box, another twenty-four telescopic targeting sights, a large number of firearm magazines, a multitude of shotgun shells of various calibers, a crossbow with sights, two bows and a large number of arrows, a Greek Police shield and a host of mobile phones, memory and SIM cards, video and still cameras, communication devices and wireless radios.

Apart from the weapons, the police discovered, in a specially configured room, Nazi symbols including flags, military uniforms, statues, photographs of Hitler and relevant figures from the WWII period, helmets, swastikas and other objects within showcase cabinets, a part of which was confiscated.

Meanwhile it was announced that the Greek foreman is facing prosecution and will be appearing before the First Instance Court Prosecutor this afternoon.

Recently, Pringle Stacey had presented a document to the Supreme Court Prosecution, asking for the case in question to be associated with the ongoing investigation into Golden Dawn. More specifically, he had claimed that he was in possession of evidence [editor’s note: said evidence has already been deposited to the Police], according to which, in a storage space owned by the shipowner, he had himself ascertained the existence of 4,000 operational firearms, which he implies may have ended up in the hands of Golden Dawn members. The investigation for this particular case has been assigned to the Antiterrorism Unit. “Given the recent developments and ongoing investigations for the discovery of hidden weaponry, I ask that my statement be associated with the findings of the investigations”, wrote Stacey in his letter.

Anastasios Pallis, a former noncommissioned officer of the Hellenic Air Force, met in 2007 one of the most powerful people in Greek shipowning (Mr. Restis) through another shipowner. He introduced himself as an owner of two ships but it was discovered later that the ships in question where ghosts!

He used a company to “justify” his income, “but if this company does not own any ships then where does its income originate?” asked a high ranking executive of the Commercial Shipping ministry.

Last April the Police enters the case, after a lawsuit filed by the British national Andrew Pring[le] Stacey regarding Pallis’ weapon museum. Mr. Stacey had founded, on behalf of Pallis, as he told “K” – he introduced himself as “a partner of Mr. Restis” – with another British national a company against maritime piracy, IMS, which at the end of its first fiscal year exhibited profits of almost one million pounds, almost the exact amount “owed to me and my partner by Pallis”, adds Mr. Stacey.

Demanding his share of the money, Stacey contacts Mr. Restis by phone and learns that the latter “had been paying the money himself without fail”. But when Stacy arrives in Greece in order to meet him, he is held against his will, something akin to a “kidnapping”, by three persons – among which was Pallis himself – in the passport check area of the airport! The details of how exactly these three were able to enter this guarded area remains unclear. Mr. Stac[e]y though, files a lawsuit after which Police raids Pallis’ weapon museum. When Andrew Stacey himself “compares” what he has seen with the police’s findings in three containers, he tells the Greek officers that many of the weapons he had spotted were not there!

At this point, SDOE enters the picture, performing two searches in Pallis’ facilities; however, all of the weapons located there (even a Swedish airplane!) appear to be “legitimately” declared with the Police’s “seal of approval”. Then in June 7th Pallis’ home in Voula is searched. A number of computers are confiscated, the contents of which have not yet been ascertained. Pallis invokes his capacity as a consul (!) of the island state of São Tomé in order to put a halt on the “assessment” of the computers by the police.

A prominent figure in the Greek Golden Dawn nazi party claims that the ‘mentally ill’ should not have the same rights as the ‘healthy’ ones, and is a public hospital psychiatrist: here.

Unfortunately, Pavlos Fyssas was not the first victim of fascist / neonazi violence festering in neighbourhoods after Golden Dawn’s rise: here.