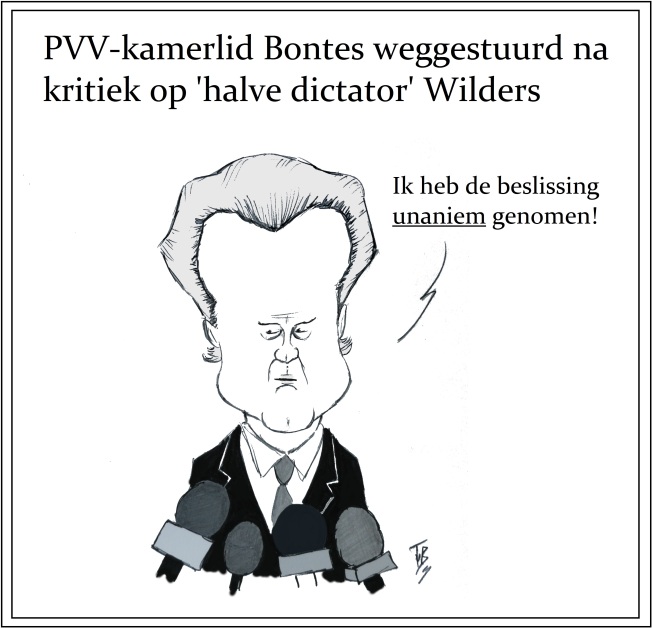 This cartoon, from De Tekentafel in the Netherlands, says (translated); PVV MP Bontes sacked after criticism of ‘semi-dictator’ Wilders. Wilders says: ‘I have made the decision unanimously!’ As Wilders is the only official member of the PVV.

Translated from NOS TV in the Netherlands, about Geert Wilders‘ xenophobic PVV party:

Member of Parliament Louis Bontes is no longer a member of the PVV fraction. According to party leader Geert Wilders there is a breach of trust. The group took the decision unanimously, Wilders said after a meeting of the caucus.

Bontes said last week that Wilders has too much power, that colleagues do not dare to say what they think and that there is too little transparency. Bontes also said that the PVV had used money that was intended for the parliamentary group for a demonstration instead.

Bontes will form a one person parliamentary caucus of his own. Now that Bontes is no longer in the PVV, Wilders’ party loses its position as biggest opposition party in parliament to the Socialist Party.

This is not the first time that Wilders has quarrelled with MPs and other representatives of his party.

Four PVV local council members in The Hague city have already resigned. Councillor Paul ter Linden was the most recent one. Translated from a 2 October 2013 regional TV report:

Ter Linden resigned Wednesday from the PVV party caucus in the The Hague city council and will continue as a one person fraction. “The PVV buys voters with false promises and really does nothing to realize those promises” he writes.

In his letter Ter Linden writes about a sickening atmosphere in the group. ‘Quarrel, intrigue and suspicion are the order of the day. Those three words (quarrels, intrigue and suspicion) make it impossible to trust one’s own party. Criticism is nipped in the bud immediately and negated. I recognize cult-like characteristics. The outside world is locked out and internal criticism is impossible. There is also a morbid exaltation of the Great Blonde Leader.”

Wilders is not really blonde. He uses peroxide.

It also hurts Ter Linden that the PVV has partnered with the leader of Vlaams Belang, Filip Dewinter.

Vlaams Belang, formerly Vlaams Blok, until Vlaams Blok was banned because of racism, is an extreme Right party in Belgium.