This video from the Netherlands, with English subtitles, says about itself:

Rembrandt was a peculiar artist, compared to his seventeenth century colleagues.

Unlike, eg, Rubens, he lived in the rebellious northern Low Countries republic; not under a monarchy like in most of Europe then. That influenced which subjects he painted, as this blog has explained before.

Rembrandt did not only differ from artists living outside the Dutch republic like Rubens; he differed from his Dutch contemporaries as well.

Five percent of Rembrandt’s works were scenes from daily life and landscapes. Far less than in many other seventeenth century Dutch painters. Scenes from daily life, or “genre art“, were popular in the Dutch bourgeois art market. Many painters, like Johannes Vermeer and Jan Steen, specialized in them.

Landscape painting may have become popular, as the Dutch Republic was one of the most densely populated and, pre machine, industrialized areas of Europe, creating a market for painted idyllic counterweights.

Some Dutch seventeenth century landscape painters specialized in special types of landscapes, like frozen canals and rivers in winter.

Other Dutch artists painted ships at sea. Rembrandt never did, as far as I know.

This video is called Rembrandt’s Timeline.

Very differently from colleagues like Jan Steen and Frans Hals, Rembrandt also never depicted a lute in his work, said lute player Wouter Lucassen during the celebration of Rembrandt’s birthday on 14 July.

Wouter participated in the celebration in a show called The Rembrandt Living Jukebox. The audience could ask which one of ten songs from Rembrandt’s seventeenth century should be played. To perform the songs there were three instruments: a lute, a theorbo, and singer Henriëtte van Rijn’s soprano voice. Henriëtte van Rijn used to sing in the Barbarella’s.

Wouter Lucassen learned his lute playing from Willem Mook, who played at the 2012 Rembrandt birthday celebration. 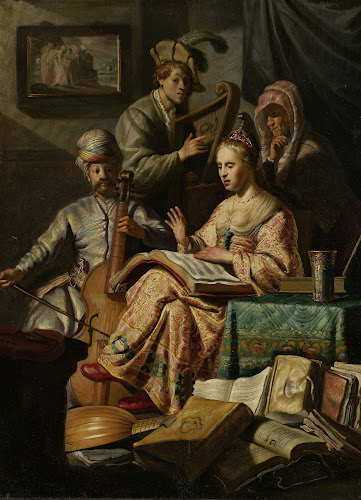 In 1626, Rembrandt did make a painting, called Musical Allegory by later art historians. It depicted a viola da gamba and a harp, but, again, not a lute.

Just before midnight, participants in the celebration went to the bust of Rembrandt, not far from Haagplein 4 building. Precisely at midnight, a wreath was hung around the bust’s neck. Contrary to last year’s celebration, I did not hurt my knee.

11 thoughts on “Rembrandt’s birthday and music”