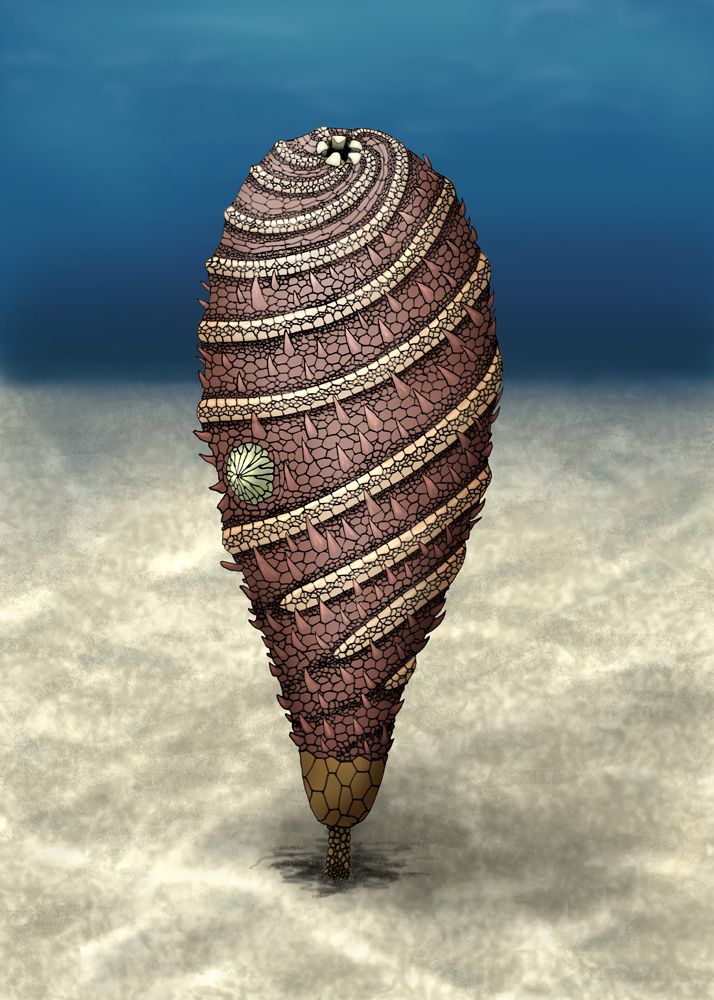 A new fossilized, cigar-shaped creature that lived about 520 million years ago has been unearthed in Morocco.

The newfound species, Helicocystis moroccoensis, has “characteristics that place it as the most primitive echinoderm that has fivefold symmetry,” said study co-author Andrew Smith, a paleontologist at the Natural History Museum in London, referring to the group of animals that includes starfish and sea urchins. Modern echinoderms typically have five-point symmetry, such as the five arms of the starfish or the sand dollar’s distinctive pattern.

The primitive sea creature, described today (June 25) in the journal Proceedings of the Royal Society B, could even change its body shape from slender to stumpy. Researchers say it is a transitional animal that could help explain how early echinoderms evolved their unique body plans, Smith said.

In 2012, Smith and his colleagues were excavating in sediments dating to about 520 million years ago in the Anti-Atlas Mountains in Morocco, when they uncovered several specimens of the strange fossil.

The creature lived on the ancient supercontinent called Gondwana during the Cambrian Explosion, a period when all creatures inhabited the seas and life on the planet diversified dramatically.

One of the oldest known echinoderms, Helicoplacus — first unearthed in the White Mountains in California — had a spiral but asymmetrical body plan. And all modern echinoderms start off as larvae with bilateral symmetry, raising the question of how and when the creatures’ distinctive five-point body plan originated.

H. moroccoensis, named after the country where it was found, had a cylindrical body that extended up to 1.6 inches (4 centimeters) long. The echinoderm’s mouth was on the top of its body, and it sported a cup made of checkered plates with a small stem at its base. It had a latticelike skeleton made of calcite.

The tiny sea creatures changed shape using a spiraling arrangement of five ambulacra, or grooves coming from the mouth that opened and closed to capture bits of food floating in the water.

The newly discovered species is the oldest known echinoderm with five ambulacra, and could shed light on how echinoderms evolved their unique body plans, Smith said.

H. moroccoensis was also found in sediments containing several other bizarre echinoderms, many of which had wacky body plans, ranging from completely asymmetrical to bilaterally symmetrical. That wide variety suggests the creatures were going through a period of dramatic diversification around that time period, Smith said.

“The important thing about the whole fauna is that there is already, by this time, a remarkable diversity in body form,” Smith said. “And yet this is only 10 [million] to 15 million years after the calcite skeleton evolved.”