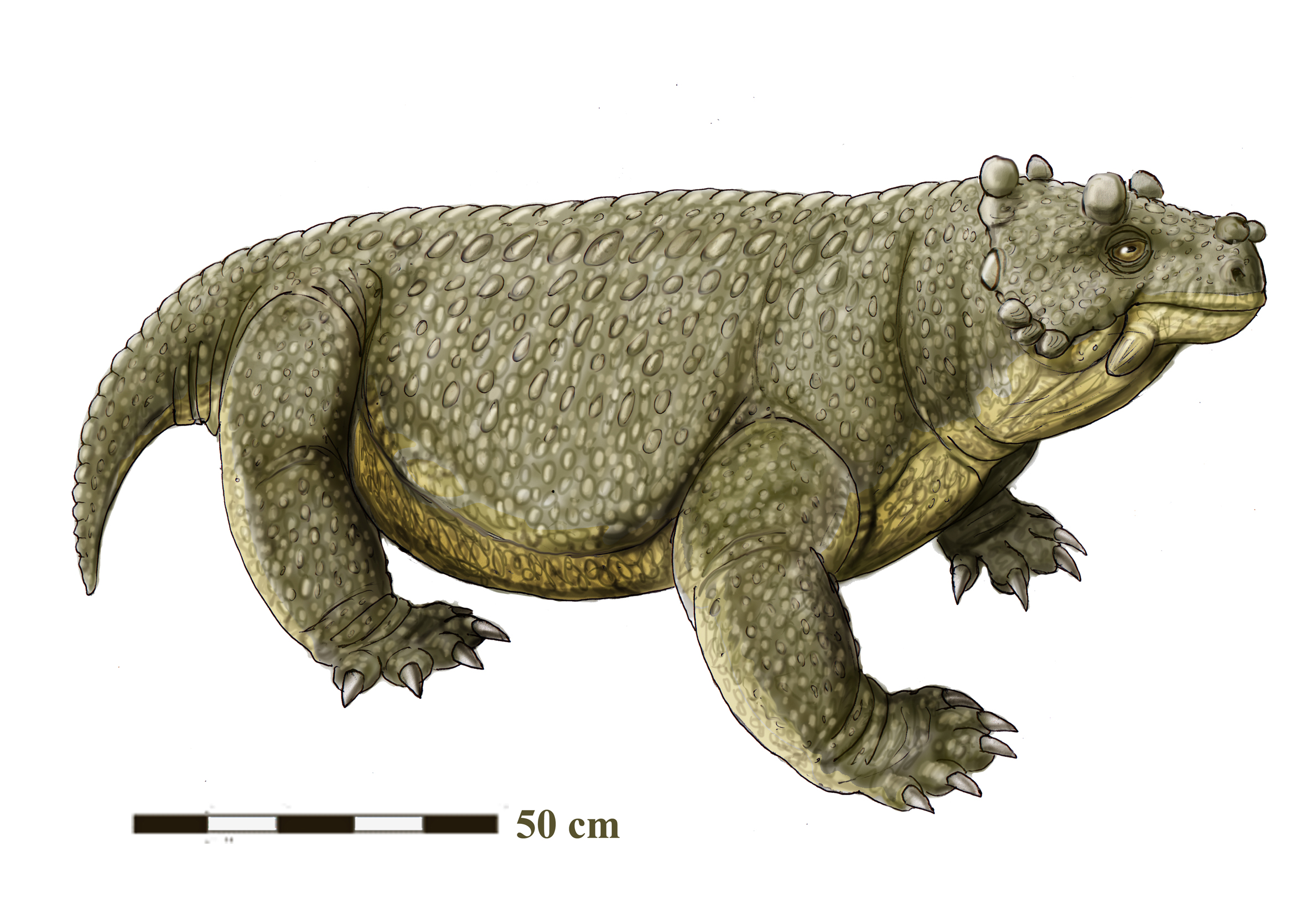 After the South African discovery of an early Triassic amphibian and a mammal-like reptile together … now a discovery from a few million years earlier, more to the north in Africa.

A bizarre reptile with knobbly growths on its head roamed a vast, isolated desert about 260 million years ago, researchers say.

New fossils from northern Niger in Africa have been described in the Journal of Vertebrate Paleontology.

The distinctive creature belongs to a new genus of pareiasaur – plant-eating creatures that flourished during the Permian period.

The cow-sized specimen has been named Bunostegos, which means “knobby roof”.

During Permian times, the Earth was dominated by a single supercontinent called Pangaea.

Animal and plant life dispersed broadly across the land, as documented by identical fossil species found on multiple modern continents.

But the new research by an international team supports the idea that there was an isolated desert in the middle of Pangaea with distinctive animals.

Most pareiasaurs had bony knobs on their skulls, but Bunostegos sported the largest, most bulbous ones ever seen in this group, which were common in the Middle and Late Permian, about 266-252 million years ago.

In life, these were probably skin-covered horns like those on the heads of modern giraffes.

“We can’t say for sure, but it is most likely that the bony knobs on the skull of pareiasaurs did not serve a protective function,” Dr Linda Tsuji from the University of Washington in Seattle told BBC News.

“They vary quite markedly in size and shape between different species, with some species lacking prominent knobs entirely, so I think that they were purely ornamental. The most probable use was for inter-specific (between species) or intra-specific (within species) recognition.”

This led them to the conclusion that its genealogical lineage had been isolated for millions of years.

Climatic conditions may have conspired to corral Bunostegos – along with several other reptiles, amphibians, and plants – and keep them constrained to the central, arid area of the supercontinent.

“Our work supports the theory that central Pangea was climatically isolated, allowing a unique relict fauna to persist into the Late Permian,” said Christian Sidor, another author of the paper.

This surprised the scientists because areas outside this central region show fossil evidence of regular faunal interchange.

Geological data show that central Pangaea was extremely dry, discouraging some animals from passing through, while keeping those within from venturing out.

The long period of isolation under these parched conditions gave Bunostegos lineage time to evolve its unique anatomical features.

Much of what was once central Pangaea remains to be explored by palaeontologists.

“It is important to continue research in these under-explored areas,” said Dr Tsuji.

“The study of fossils from places like northern Niger paints a more comprehensive picture of the ecosystem during the Permian era.”