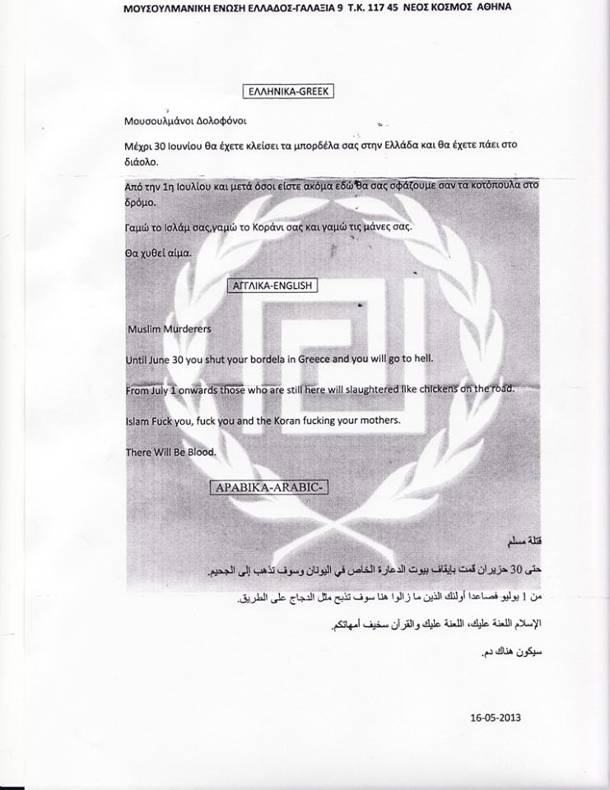 From I Can’t Relax in Greece blog:

The Muslim Association of Greece says they received a threatening note giving all Muslims one month to leave the country or be ‘slaughtered like chickens’. The letter, as it appeared on the association’s webpage, has the Golden Dawn emblem printed on it, but the party has firmly denied having anything to do with it.

Yeah, the Golden Dawn party denies so much.

They deny being nazis, though their party song is a Greek translation of Hitler’s Horst Wessel Song.

They deny being nazis, though they do the nazi salute.

They deny being nazis, though a Golden Dawn MP has the nazi slogan Sieg Heil tattooed on his leg; and Golden Dawn MPs shout Heil Hitler in parliament.

They deny being nazis, though another MP is in a band, singing lyrics like “F*** Simon Wiesenthal, f*** Anne Frank” and “Juden raus”.

They deny being nazis, though their Fuehrer, Nikolaos Michaloliakos, wrote an article in the party’s magazine with the title “Hitler for 1000 years”, in which he supported nazism and white supremacy. Specifically he wrote “We are the faithful soldiers of the National Socialist idea and nothing else” and “[…] WE EXIST, and continue the battle, the battle for the final victory of our race”. The final words of the article are: “HEIL HITLER!”

No sir, we aren’t nazis. We are only cuddly, peaceful “nationalists” … [sarcasm off].

The Muslim Association of Greece on Friday received a threatening note giving all Muslims, Greeks and foreigners, one month’s time to evacuate the country or be “slaughtered like chickens”, according to a statement released by the association on Saturday.

Until June 30 you shut your bordela in Greece and you will go to hell.

From July 1 onwards those who are still here will [be] slaughtered like chickens on the road.

There will be blood.

Last week, a number of incidents involving anti-Semitic rhetoric caused the reaction of the Central Board of Jewish Communities in Greece, which issued an announcement.

The announcement refers to Golden Dawn MP Christos Papas who admitted admiration of Hitler during a parliament session.

Facing pressure from his coalition partners to get behind an anti-racism bill aimed at curbing the neo-Nazi Golden Dawn party, Prime Minister and New Democracy Conservative leader Antonis Samaras will meet with them on May 27. PASOK Socialist chief Evangelos Venizelos and Democratic Left (DIMAR) head Fotis Kouvelis, who almost always yield to whatever Samaras wants, are said to be upset he has backed away from tougher penalties for racist crimes, including assaults on immigrants: here.

Antiracist group Keerfa alleges that men, stabbed on May 9 when they demanded 45 days’ backpay, are being deported in order to protect their employers

Two Bangladeshi agricultural labourers who say they were stabbed by middlemen in a dispute over wages earlier this month are being threatened with deportation, an antiracist group has claimed.

The group, the United Movement Against Racism and Fascist Threat (Keerfa), said the police have initiated deportation procedures against the two, in order to cover up the role of their employers in the stabbing.