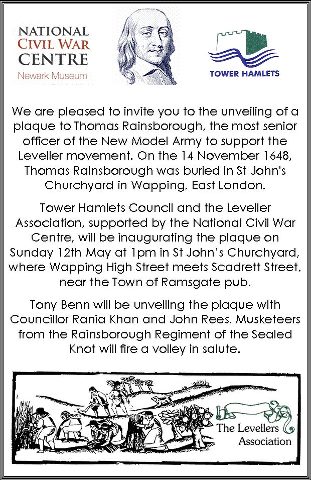 By John Rees in Britain:

History isn’t meant to happen this way in Gove’s Britain. A young Muslim woman local councillor and the left getting together, to raise a memorial to a Leveller leader in a revolution the Tory right would rather forget, certainly isn’t on his agenda.

But that is how it’s happening in the London borough of Tower Hamlets on Sunday when Tony Benn, Councillor Rania Khan, Jeremy Corbyn MP and I unveil a plaque to Leveller leader Colonel Thomas Rainsborough of the New Model Army, a long-time hero of mine.

Researching his funeral procession for the book The People’s History Of London, I discovered that it turned into a huge Leveller demonstration which came from Tottenham via the City and ended in St John’s Church, Wapping.

The original church is long gone, as is its replacement, but the churchyard where Rainsborough was buried remains.

Rania Khan and I had met in Stop the War Coalition and I’d been part of the campaign that got her elected as a Tower Hamlets councillor. We met again at one of the meetings to launch the People’s History Of London and we talked about how great it would be if there were a plaque to Rainsborough in St John’s churchyard.

She said she would see what she could do and was as good as her word.

A few months later, a Tower Hamlets council officer from the parks department got in touch and we chose the location for the plaque and agreed the wording, based on a Leveller leaflet that was issued on the day of the funeral in November 1648. The new National Civil War Centre at Newark, due to open next year, lent its support.

The Rainsborough Regiment of the Sealed Knot re-enactors are sending a file of musketeers to fire the salute on Sunday. Their ensign will be there with the regiment’s flag, wholly appropriate since some accounts say that the sea-green ribbons that the mourners wore that day and which were to become the Leveller movement’s badge were torn from the regimental banner of the same colour.

On the day of the original funeral the royalist press complained that the crowd contained a ragtag of “Tom the tapster” and “Dick the doorsweeper.” On Sunday at 1pm we hope that some of their 21st-century counterparts will return the Levelling spirit to St John’s churchyard to honour the man who, at the Putney debates a year or so before his death, spoke these never to be forgotten words: “The poorest he that is in England hath a life to live as the greatest he … I think it’s clear, that every man that is to live under a government ought first by his own consent to put himself under that government and I do think that the poorest man in England is not at all bound in a strict sense to that government that he hath not had a voice to put himself under.”