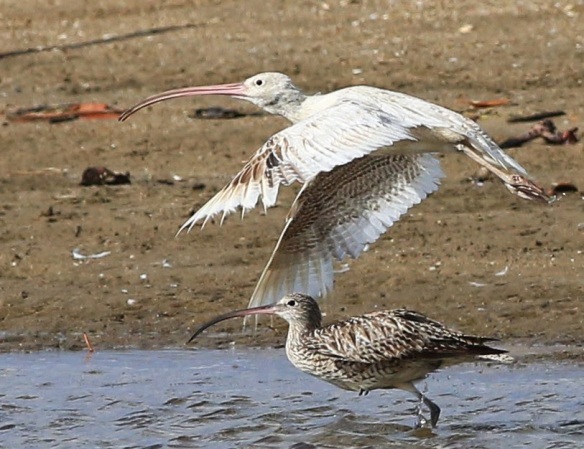 March 2013. A reader from Australia, Malcolm Macdonald, has sent us some images taken by John Booij of an unusual leucistic Eastern curlew (Numenius madagascariensis). The Eastern curlew is usually a mottled brown bird, but John’s bird is almost uniformaly white. The shots were taken 22 March 2013 at Taylor’s Beach, Queensland, Australia.

Malcolm says “I have seen this bird here for a couple of weeks. Inquiries have so far resulted in no other Australian records of similarly coloured curlews.”

According to Wikipedia, “The Far Eastern Curlew spends its breeding season in northeastern Asia, including Siberia to Kamchatka, and Mongolia. Its breeding habitat is composed of marshy and swampy wetlands and lakeshores. Most individuals winter in coastal Australia, with a few heading to South Korea, Thailand, Philippines and New Zealand, where they stay at estuaries, beaches, and salt marshes. During its migration the Far Eastern Curlew commonly passes the Yellow Sea.”

Leucism is a very unusual condition whereby the pigmentation cells in an animal or bird fail to develop properly. This can result in unusual white patches appearing on the animal, or, more rarely, completely white creatures. Albinism is a different condition. The easiest way to tell the difference between the two is that in albinism the eyes are usually pink or red, and albinism affects the entire animal, not just patches. This occassionaly causes very excited biologists to think they have discovered a new species, when in fact leucism is the cause of the unusual markings they have seen.