This 2016 video is called An Introduction to Leuven.

It has many attractions, from the Middle Ages and later.

These include the oldest botanical garden in Belgium, founded in 1738: the Hortus Botanicus Lovaniensis.

This 2017 video is called THE BOTANICAL GARDEN IN LEUVEN (Part 1).

When we went there, it was sunny weather, with higher temperatures than later in March.

And a canary, but it is in a cage.

Bee hives. A “hotel” for solitary bees and other insects.

And chickens. They are of the “Brakelhoen” (Braekel) race, the only surviving Flemish Belgian race.

This is a Braekel video.

Leuven university is about 150 years older than the one in Leiden. However, the botanical garden is some 150 years later than the garden in Leiden; and smaller. Then, again, in Leiden, there is only one source of a brook flowing to the big pond. Here, there are two sources and two brooks.

In the pond, mallard ducks and carp, like often in Leiden.

In Leuven, there is also the Sint-Donatuspark or city park. It includes remains of the 12th century city wall. A nuthatch was looking for food between the stones of that old wall. Also in the park: blackbird, chaffinch. 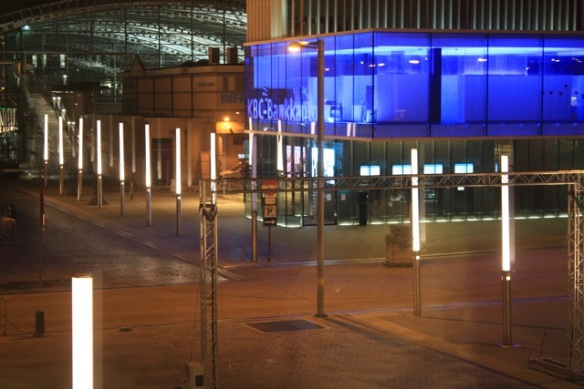 In the evening, this photo of the Martelarenplein (Martyrs’ Square) near Leuven railway station.

What would tomorrow in Leuven bring for us?

8 thoughts on “Leuven in Belgium, botany, birds and bees”