Before we departed, the song thrush singing in a parking lot treetop. A carrion crow drove it away to sit on the treetop itself.

At the Meijendel parking lot, jackdaws and rooks on trees. A chaffinch on the ground.

A blackbird. A great tit.

Then, a special bird. A marsh tit. It moves so fast among the branches that it is impossible to make good photographs of it. 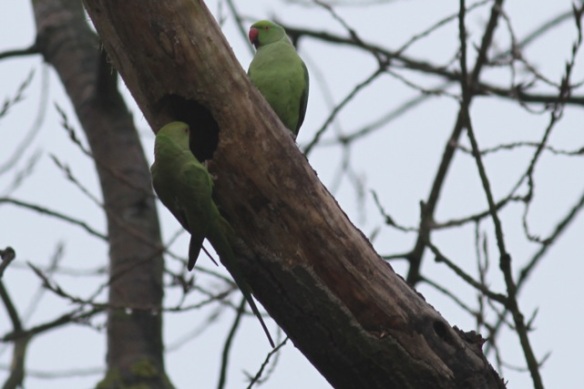 Next, a ring-necked parakeet couple. Less and less of these parrots are by now in the big flocks sleeping, eg, on the island in the pond of The Hague city centre. Ring-necked parakeets nest early in the year. The two birds here inspect whether a hole in a tree is fit for a nest. They seem to like it.

Much to the disappointment of a starling couple, which would have liked to nest there as well. 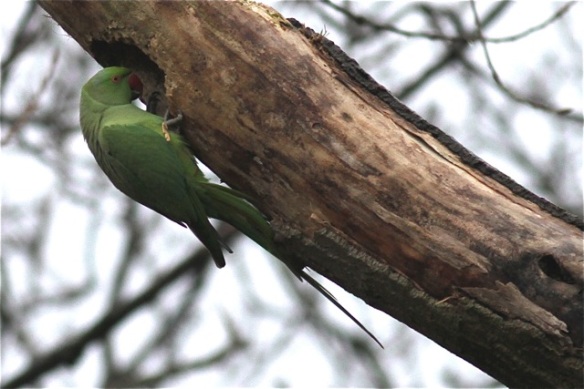 There are still icy patches on the footpaths.

At the hide, the water in the lake is still frozen. One of us speaks about seeing a bittern in the reed beds, but it may be wishful thinking. Others think they hear cranes. Wishful thinking as well? Is the sound really geese?

Another starling couple. This time with a nest hole which is unambiguously theirs.

The male spreads his wings and sings.

The next lake is mostly frozen as well. A lone coot swims in the open water part.

Three Canada geese flying over head. They land in one of few ice-free lakes, south of the path to the sea. A female common pochard.

This looks like a good spot for counting birds in my fifteen minutes for the international Great Backyard Bird Count, organized by the Cornell Lab of Ornithology in the USA.

Then, on to the far western dunes, where one has a view of the sea. Over twenty sanderlings. Some resting; some running frantically along the floodline.

As we walk back, a buzzard sitting on a bush. Later, a kestrel flying.

Tulostoma fimbriatum fungi. A species which does not mind winter cold as much as many other fungi species.