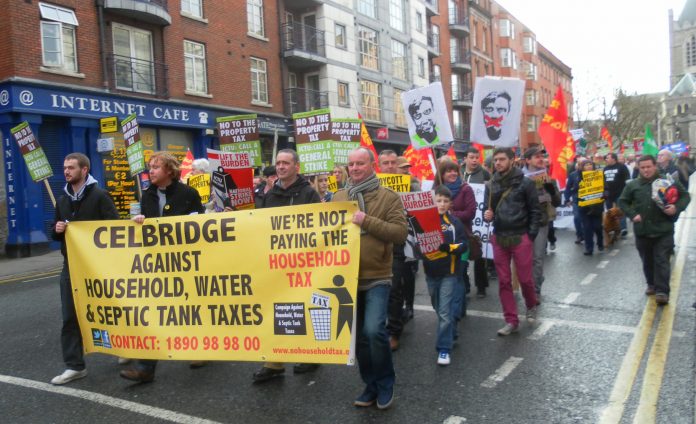 OVER 100,000 workers in their unions, with students and youth marched on Saturday through the centre of Dublin, furious at the 64 billion euros of debt that the government wants to extract from the people of Ireland over the next forty years.

The Dublin demonstration was part of a nationwide day of action where marches took place simultaneously all over the country including Cork, Waterford and Limerick.

The Dublin march began at Cork Street and shouts of ‘No more Cuts!’ and ‘Not our Debt!’ filled the air. There were calls to bring down the government and for a general strike.

There were mass delegations of teachers marching behind their giant union banners: Irish National Teachers Organisation (INTO), Teachers Union of Ireland (TUI) and ASTI.

Masses of postal workers turned out behind the Communication Workers Union (CWU) banner; there was a big delegation of electricians, plumbers and fitters behind the Technical and Electrical Engineering Union (TEEU); big delegations of bank workers and financial service workers behind the financial union IBOA, as well as big turnouts from Unite, Mandate, SIPTU and Impact.

The crisis in Ireland runs so deep that splits are emerging in the Irish state with a section of Garda officers marching against the debt.

Patricia Fanning, a special needs assistant in Impact, said: ‘Children shouldn’t have to pay for the debt!

‘Our staff numbers are being cut and children are losing support.

‘Children that were being supported are now being left on their own and unable to cope.

‘The people of Ireland didn’t incur the debt and our children should not be made to pay it back!’

Anne Leonard in the South Dublin County Council branch of Impact said: ‘I work for the council.

Most of the staff where I work are on low pay, lower grades of work and they are expecting more and more from us all the time.

‘The workload is getting bigger, but our staff numbers are getting smaller and smaller. We have to work extra hours for less money.

‘What we have to do now is all come out on a general strike.

‘We shouldn’t be paying off this debt, it is not our debt.

‘They are just going to town on us now and we will literally be working for nothing.’

Martina McKarney from the Monaghan County Council branch of Impact told News Line: ‘We have been cut so much that there is nothing left to cut, we all have families to feed.’

Maureen Rowley, in the SIPTU union which covers health workers, said: ‘Not only have they cut our wages drastically, but they have sacked so many people that it is affecting our service users in a big way.

‘There simply are not enough staff to look after our service users who have special needs.

‘We should get rid of this government. We say: stuff the debt. It is the ordinary people who are paying for it.’ Her sister Bernadette McDonald added: ‘The government are puppets of the European Union. Our kids have all gone away!

‘My son is in Canada; my sister’s son and daughter are in Australia. The only thing that Ireland is exporting is young people.

‘The European Union is going to collapse and the sooner the better.’

Aoife Sullivan, an eleven-year-old girl who came on the march with her mum, said: ‘I think the politicians should take notice of our march and some of the bankers should go to prison for their horrendous deeds because they have taken from the people to line their own pockets.

‘They lost the gamble and I think it is astounding that we will be paying this back for 43 years.

‘Cancel the debt! I am going to keep on marching and keep on fighting!’

Lee McEnery, an unemployed youth who was marching with his friend, said: ‘We came up from Waterford to join the march today. There is a march going on in Waterford but we decided to come up and see the one in the capital.

‘Over 3,000 people worked for Waterford Crystal and all but 60 lost their jobs.

‘They occupied their factory and the Garda tried to get them out.

‘The lack of jobs is a symptom of a bad system, the whole system has to come down.

‘It is like trying to clean the wounds of a bad infection. If the core issues are not addressed then the infection just comes back.

‘We need to have a people’s party and we need a general strike, the country has to come to a standstill and we need everyone to get together and strike.’

Steve Fitzpatrick, the General Secretary of the Communication Workers Union (CWU) covering postal and telecommunications workers, said: ‘We are marching today against the debt that is being foisted upon us.

‘Everybody in the country has been cut. A lot of postal workers depended on extra earnings from overtime and that is all gone now.

‘People are feeling the impact of taxes and less take-home pay and the extra amounts they have to pay for the services so they are being hit from both sides.

‘Water charges will be introduced in the next twelve months. Presently it is free and this is at the behest of the Troika.’

Ciaran Burke, a student studying Psychology, who was marching behind the Mandate banner which read ‘Austerity kills jobs’ said: ‘I have to pay 5,000 euros a year for my course.

‘I get a loan from the Credit Union. It is impossible to work and I am looking for jobs everywhere but no-one is really employing.

‘I am in complete opposition to Europe. We joined them for trade, not to be controlled by a foreign country.

‘It is going to boil over. If you heap that much austerity on people then they will bite back and that means a general strike.’

Orla Howley in the Dublin North County District 15 of the Irish National Teachers Union (INTO) said: ‘We have all taken a pay cut but there have also been changes to our conditions.

‘There is less support and that affects the kids.

‘The expectations they have of you as a teacher are increasing all the time but the support and the resources are being diminished at the same time.

‘The teaching hours dedicated to each student are also being diminished.

‘There will be a national strike if they increase class sizes and that is on the table.

‘The media have tried to spin this forty-year debt into a “Good News Story”. With inflation over forty years who knows how much you will pay back?

‘Everybody is really stretched to the point of breaking.’

Feargal Anderson, an electrician in the Technical and Electrical Engineering Union (TEEU), told News Line: ‘Me and my friend have been on protective notice for the last two weeks. We will be losing our jobs and made redundant.

‘The company I work for claim that they are in “financial stress” and our manager says he has to “restructure” and “downsize”.

‘I have a serious mortgage and my friend has an eviction hanging over him.

‘The austerity measures are hitting every worker harder than they have ever done in the history of the state as the banking debt is not being dealt with.

‘We are picking up the costs of the private gambling debt of the elite few.’

‘There have been 200 voluntary redundancies at the moment where I work and that is out of a group of 600.

‘So they are looking to reduce the workforce by a third!

‘We were forced to make our banking debt sovereign debt. The banks would have gone down if it were not for the government guaranteeing all their debt.

‘In the Anglo Irish Bank, which has the most lethal toxic debt, the government has made the debt the responsibility of the people of Ireland rather than the bondholders.

‘IBRC which has taken over from the collapsed Anglo Irish Bank has just sacked 800 workers, which may well turn out to be over a thousand workers. They did this only a few days ago.

‘They are only going to give them two weeks’ statutory redundancy.

‘It is absolutely disgraceful to treat workers like this.

‘Ordinary people, serving on the counters in banks, front line staff, and they are treating them despicably!’

At the end of the march, the Irish Congress of Trade Unions (ICTU), which organised the march, had erected a stage where bands were playing to ‘entertain’ the crowds of workers after the march.

An angry worker, Mary Ryan shouted into a megaphone over the music: ‘We don’t want acts, we want action! We are not in the mood for singing, we don’t want songs!’

She got up on to the stage and tried to speak.

People in the crowds shouted: ‘Let her speak,’ as she was forcibly dragged off the stage by an ICTU trade union leader.

A group of young people began shouting at the stage that it was a disgrace that they would not let this woman speak and that the ICTU leader physically dragged her off the stage.

Michael Yolan, an unemployed electrician, shouted: ‘Let her speak, why won’t you let her speak? Why should we pay for the debt? It’s not our debt!’

Speaking to News Line he added: ‘It is scandalous that the promissory notes that we had as leverage have now been turned into legal debt.

‘We need to get rid of this whole system. The last government under Brian Lenihan made exactly the same mistake. This government is following up that mistake by legalising the debt.

‘We need a social revolution. Why should our future generations pay?

‘It is breaking families apart. Ireland has one of the highest suicide rates per capita in the whole of Europe, it is a tragedy.

‘I want to make a new movement in Ireland that stands up for the people. We have to get rid of this system if we are going to have a future in Ireland.’

Canadian austerity measures are hurting society’s most vulnerable and the government is being callous towards the needy: here.