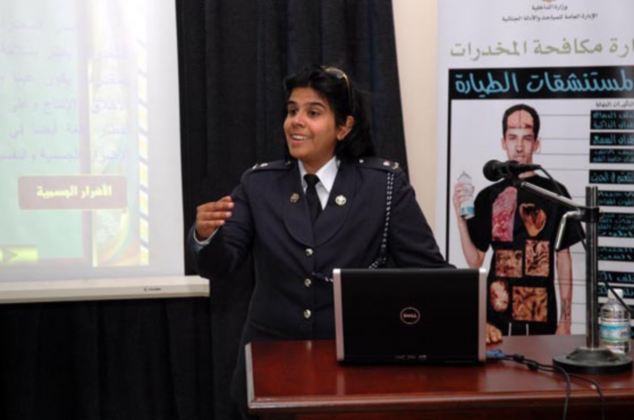 His Royal Highness Prince Shaikh Nasser Bin Hamad Al Khalifa is not the only Bahraini royal who is not just satisfied with a society where torture keeps the royal family royal and the subjects subject; but who likes to torture himself.

A Bahraini princess is facing charges of torturing pro-democracy activists in the Gulf island kingdom.

Noura Bint Ebrahim al-Khalifa, who serves in Bahrain’s Drugs Control Unit, is accused along with another officer of torturing three people in detention.

Hundreds of protesters were detained as Bahrain struggled to put down a popular uprising that began in February 2011.

The uprising, which began peacefully with calls for democratic reform, was crushed by the ruling al-Khalifas.

Noura al-Khalifa, 29, who denies the charges, appeared in court on Sunday and Monday to hear the allegations.

In one case, the princess is accused of torturing two doctors, Ghassan and Bassem Daif, brothers who worked at the Salmaniya medical complex.

Medical staff from the facility went to help injured protesters after security police used force to disperse thousands of people who had camped out at an iconic landmark, Pearl Roundabout, in the capital, Manama.

At least two people were killed and hundreds wounded when police attacked with batons, tear gas and birdshot.

In March and April 2011 many of the medical staff were arrested and detained. It is alleged that Ms al-Khalifa tortured the doctors at that time.

She is also accused of torturing another person, 21-year-old Ayad al-Qurmazi.

This video, in Arabic, with English subtitles, says about itself:

Ms al-Qurmazi was arrested in March 2011 after giving public readings of poetry she wrote that was critical of the ruling family.

She alleges she was held for nine days, blindfolded, beaten with cables and threatened with rape. She identified Ms al-Khalifa as her torturer.

Ms al Qurmazi’s lawyer Reem Khalaf told the BBC that on one occasion while she was being beaten around her head, the blindfold slipped and she saw Ms al-Khalifa.

“Noura was very angry that Ayad had seen her,” Ms Khalaf said.

Ayad al-Qurmazi told the BBC she did not regret reading her poems or taking Noura al-Khalifa to court, even though she had lost her place at college and was the target of online threats and abuse.

“I am not sorry. I only said what all Bahrainis feel and I haven’t done anything against my country. What I am doing, I am doing for my country.”

The case was adjourned to 7 February after three witnesses failed to turn up.

No-one from the Bahrain government was available to comment on the charges against Ms al-Khalifa.

Meanwhile, a high level delegation of the torturing Bahraini absolute monarchy arrives in Davos, Switzerland, for the World Economic Forum.