Sunday 9 September was national monuments’ day in the Netherlands.

In Leiden city that meant that medieval and later buildings, not always open to the public, were open today.

Near the medieval Pieterskerk church, there were comedians in seventeenth century-style clothes.

Inside the church, a copy of the famous Last Judgment painting by Lucas van Leyden (the original is in the Lakenhal museum).

Not far from the church, the Gravensteen, the counts’ castle. Originally from the 13th century, built by the counts of Holland against their rivals, the bishops of Utrecht. The building was also a prison for the count’s enemies.

In 1463, the count transferred the building to Leiden city authorities. They added new buildings to the complex. Eg, in 1556, an extra cell block was added because of the big numbers of protestants jailed by the Roman Catholic inquisition.

To try to convert the “heretic” prisoners to Roman Catholicism again, frescoes depicting Jesus Christ, and religious slogans were painted on the cell walls. Supposedly, if the heretics would repent just before their execution, they might not have to burn in hell. However, last minute conversions did not mean that the prisoners would not get the death penalty.

After the Dutch revolt against the Roman Catholic king of Spain, the new protestant authorities had the frescoes covered with whitewash. They were discovered again in the twentieth century. 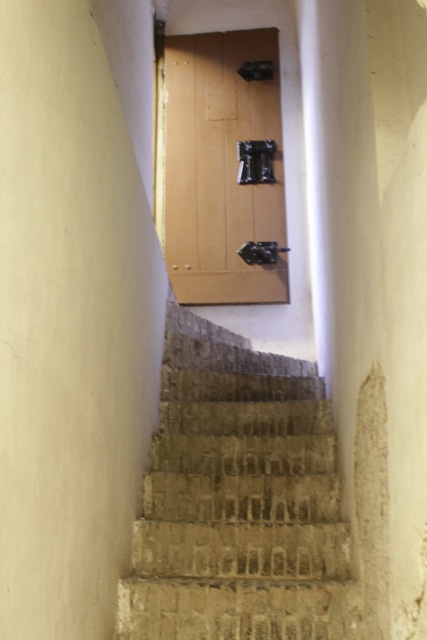 Executions of prisoners were on the square before the Gravensteen. From a gallery near their courtroom, judges could see the killing of the prisoners. This happened there for the last time in 1853.

After the Gravensteen, we went to another monument, at Langebrug 63. Originally built as a medieval house. Since 1912, it is a Plymouth Brethren church.

Today, there was (mainly classical) music there, by Het Nonet.

8 thoughts on “Churches and castle in Leiden city”