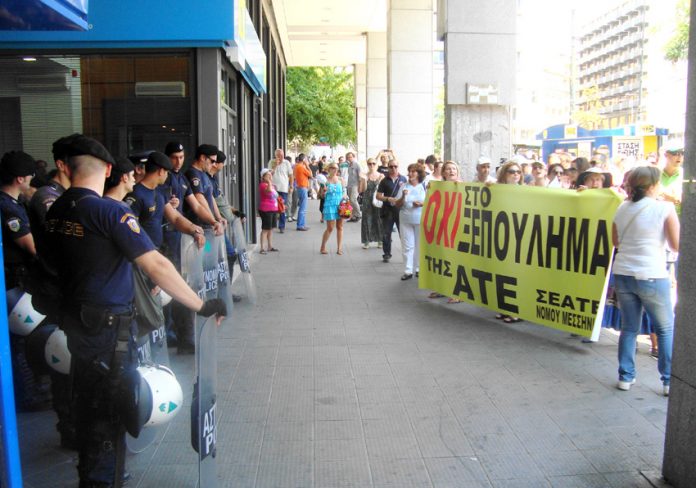 GREEK bank workers at the ATE Bank (Agrarian bank) decided last Monday in a mass meeting to continue their national strike against the sell off of the ‘healthy’ part of the Bank to the private Piraeus Bank while the other ‘rotten’ half, according to the Bank of Greece, is to be liquidated.

About 350 ATE Bank workers staged a mass picket at the bank’s HQ on Monday demanding that ATE Bank stays united and public.

For decades, ATE Bank offered cheap bank loans and mortgages to hundreds of thousands of farmers and village inhabitants.

These people are now facing total ruin if ATE Bank is privatised, since the Piraeus Bank would demand immediate loan payments at much higher commercial bank rates.

The SEATE, the ATE Bank trade union, have issued a call to farmers to support their strike.

In many cities and towns throughout Greece, ATE Bank workers are picketing daily the bank’s branches assisted by workers and small farmers.

At the Athens mass picket, ATE Bank worker Yiannoula Chrysikou spoke to the News Line about the strike.

Chrysikou was critical of the SEATE as well as the OTOE (federation of bank workers’ trade unions) leaders, who have refused to call out on strike the remainder of bank workers.

She was going to raise this issue and the call for a general strike at the union’s mass meeting. The majority of ATE Bank’s employees are married women in their 30s and 40s.

Chrysikou showed a letter from Piraeus Bank in effect affirming that, if the takeover goes ahead, all 5,500 ATE Bank workers would be sacked and offered re-employment under new conditions.

That involves the same salary but without supplements and pension rights. It would also mean that the new employer Piraeus Bank would have the right to sack any worker.

Piraeus Bank is one of the four Greek banks that are, in effect, bankrupt.

They are operating thanks to constant aid of billions of euros from the Greek state as part of the EC-IMF-ECB bailout accord of 130bn euros early this year, out of which some 40bn euros are to be handed over to the four main Greek private banks to keep Greek capitalism afloat.

Up to now, the GSEE (Greek TUC) have remained silent on the strike.

SEATE and the Postal Bank’s trade union were staging a joint rally on Wednesday. Postal Bank is under immediate threat of privatisation.

Meanwhile, Greek armed riot police squads assisted by other police units continued on Tuesday, for the fourth day running, the biggest pogrom against immigrant workers and their families in Athens code-named Xenios Zeus, under the pretext of searching for ‘illegal immigrants’.

Literally thousands of police, with vans and buses, have cordoned off large chunks of the city centre arresting everyone on sight that does not look Greek.

The arrested persons are made to stand in line or sit on the pavement; then police officers check their identity papers or passports and make lists.

All arrested persons are then bused to the Athens police HQ where they are further interrogated. Their fate is decided by police officers alone, with no lawyers present.

On police officers’ jurisdiction, the arrested persons are deported or taken to the Amygdaleza ‘illegal immigrants’ concentration camp just outside Athens, or put in cells.

According to Greek police data, in the period 28 July to Friday 3rd August, some 4,340 police officers and 1,000 police vehicles where employed in the Xenios Zeus operation.

Nearly 14,000 persons (3,500 Greek nationals and 10,500 of other nationalities) where rounded up during that period. Of these persons 500 Greeks and 3,800 foreigners were charged with minor offences and arrested.

Operation Xenios Zeus (Foreign Zeus) begun last Saturday, centred on three main Athens squares, with armed riot police making sure that their weapons were in full view of bystanders and tourists just under the Acropolis.

Again according to released police figures, 4,900 persons were rounded up, of which 1,130 were arrested as ‘illegal immigrants’. Nine public persecutors were involved in the police search of 52 buildings.

Last Sunday, police said that 1,130 persons were rounded up of which 395 were arrested as ‘illegal immigrants’. 88 immigrants have been deported.

The Greek Public Order Minister Nikos Dendias said that the operation is being carried out on direct orders from the Prime Minister of the three-party coalition government Antonis Samaras, the leader of the Conservatives.

Dendias said that the operation was combating ‘the biggest invasion of immigrants in our country’. The Greek capitalist media presents the state and police pogrom as ‘systematic’.

The Greek Opposition party Coalition of the Radical Left (SYRIZA) parliamentary deputy Dimitris Tsoukalas protested against the police pogroms, stating that ‘fully-armed police arrested on the Greek Prime Minister’s orders anyone who does not look like a Greek in the Athens city centre’.

Tsoukalas implied that the pogrom started symbolically on 4th August, the date that a pro-fascist dictatorship was imposed in Greece in 1936.

Tsoukalas pointed out that: ‘On Saturday afternoon people, mostly men, scared with their heads down, were immobilised by the special squads of the Greek police.’

In a statement last Sunday the Greek Communist Party (KKE) called the pogrom ‘an exhibition of inhumanity and barbarism’.

Both SYRIZA and the KKE have called on the government to stop such operations. …

At the same time, hundreds of Greek riot police are operating in the Chalkidiki district in northern Greece against protestors who have launched a militant campaign against the plans for an open gold mine using cyanide by Canadian firm Eldorado Gold.

Local people say that the firm’s plans will destroy their health, the farming soil, their livestocks and the thriving tourist trade in the area.

Speaking on a Greek TV station, the Public Order Minister Nikos Dendias implied that the people of the village of Skouries, the nearest to the gold mine, would get the same treatment as the Athens steel workers. ‘As in the Hellenic Steel plant, likewise here legality will be enforced.’

That to Greek people sounds almost identical to the hysterical proclamations of the 1967-1974 military junta leaders, who sent the army and the police against workers and students, killing hundreds.

The Greek government’s motto is fear; the EC-IMF-ECB-installed three-party coalition junta, parading as a parliamentary government, is out to smash workers and youth so as to make sure that the prepared new massive, almost 15 billion euros of public cuts and slashing of wages and pensions can be implemented.

SYRIZA’s perspective is that the current Greek three-party coalition government is disintegrating and in a few months’ time a new general election will be held, surely to be won by SYRIZA.

As the economies of Italy and Spain collapse, it is clear in statements by politicians in those countries, that democracy is a ‘luxury’ not suited to today’s economic crisis.

The issue of a general strike in Greece, against the EC-IMF plans and barbaric civil war, is being raised by some bankworkers in the current all-out national strike of the Greek Agrarian Bank (ATE) against privatisation.

Last weekend, Athens witnessed events not seen since Greece’s military dictatorship of 1967-1974. Some 4,500 police officers were mobilized to round up thousands of people, singled out because their skin colour and general appearance suggested they were immigrants: here.