This 2015 video is called Rembrandt vs Vermeer: The Titans of Dutch Painting.

On 14 July 2012, famous seventeenth century artist Rembrandt was remembered with a special night in the city where he was born, Leiden in the Netherlands.

To be more precise, in the Haagweg 4 building, where many artists of today work. That is only a few hundred meters away from the place where Rembrandt was born on 15 July 1606.

This year, there was an extra reason to celebrate, as local museum De Lakenhal managed to buy a unique Rembrandt painting.

This is a Dutch TV video about the Lakenhal museum in Leiden buying the painting The Spectacles Salesman by Rembrandt.

There was an exhibition called 51 x Rembrandt. 51 artists had made their own works of art, inspired by Rembrandt’s The Spectacles Salesman; of the same small size as Rembrandt’s work.

There was also an exhibition of photographs inspired by Rembrandt’s paintings; The Spectacles Salesman and other ones. The three photographers of Light 4 Focus, like Rembrandt, use light-darkness contrasts in their work, unlike many other photographers today.

There was a guided tour around the big building. Haagweg 4 was built in 1895 as a vocational school. Later, the school closed down. In 1993, artists squatted the building, and managed to become legal residents.

Artists’ studios in the building were open. We went to the studio of Fenny van de Wal-Timmerman. She paints especially lakes in France. A bit like Claude Monet; though she avoids water lilies in her paintings, in order to not look too much like Monet.

In the basement, there were murals, depicting marine animals, like sharks, sea turtles, and cephalopods.

There was a lecture about Rembrandt’s painting The Spectacles Salesman, by art historian Els de Baan. She said that the painting is one in a series of five, about the five senses (according to Aristotle). Two other Rembrandt paintings in that series are now in private collections in the USA. We don’t know where the two others are; were they ever painted? 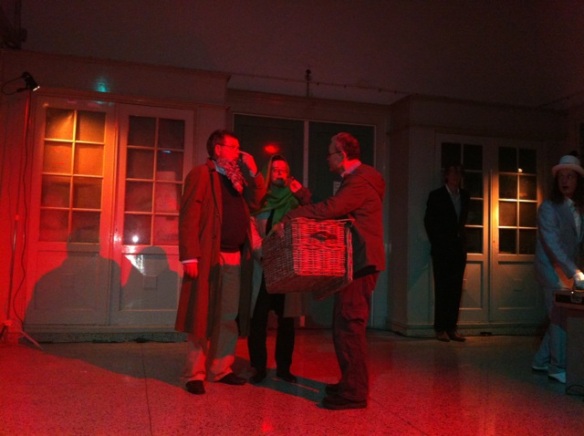 Rembrandt depicted the spectacles salesman as a fraud.

After Ms de Baan, there was the lute player Willem Mook. He played music from the age of Rembrandt. Including a composition by Constantijn Huygens, not only a composer, but also a poet and secretary of the Prince of Orange, the would-be (but not in reality) monarch in the Dutch republic. Huygens discovered young Rembrandt, and gave him an opportunity to paint at the court in The Hague of Prince Frederik Hendrik. (However, the prince’s wife did not like Rembrandt’s too realistic portrait of her. Rembrandt went on to paint, not at the aristocratic court in The Hague, but in bourgeois Amsterdam). 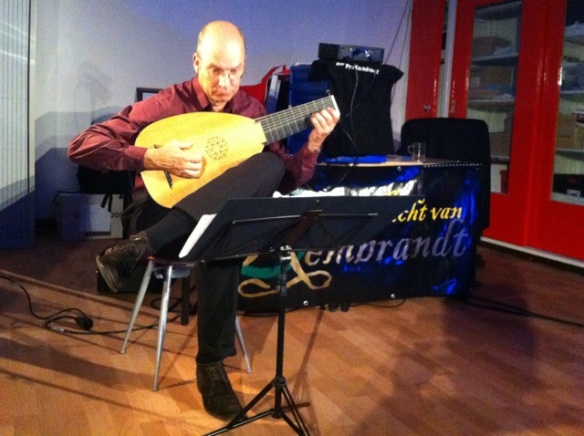 Het Blauwe Uur made a computer-generated 3D projection of Rembrandt’s studio, as it might have been.

At 23.30, the celebration in Haagweg ended. Behind musicians, people walked to the Rembrandt bust near the Witte Singel canal. At 0.00, midnight, the beginning of Rembrandt’s birthday, a wreath was hung around the bust.

It being dark, I did not notice a sidewalk, and fell. My knee and wrist still hurt.

16 thoughts on “Rembrandt night in artist’s city of birth”