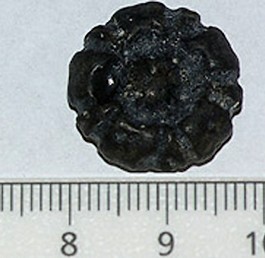 Translated from Ecomare museum, on Texel island, the Netherlands:

A small black rock between a pile of shells on the beach of Texel. The 7-year-old Marit IJmker thought it was special and took it. Once home, she was still curious what it was. In a letter she sent her little rock to Ecomare curator Arthur Oosterbaan. It was a small fossil sea urchin. A very nice and special find!

The fossil is pentaradially symmetrical. That is a feature of starfish and sea urchins. The spines are gone. On the beach quite often fossil sea urchins are found, but this is a different species. The fossil that Marit has found is more than 65 million years old, and dates from the Cretaceous period, the time of the dinosaurs. In the Ice Age the glaciers of southern Sweden or Denmark carried it to the North Sea. Because, a few weeks ago, the beaches of Texel were raised with sand from the North Sea, the fossil ended up here.