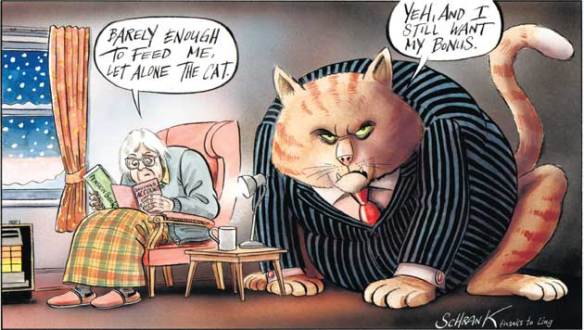 By Paddy McGuffin in Britain:

Unions reacted with outrage today after it emerged that rewards for blue-chip bosses rose 12 per cent to an average of £4.8 million last year.

Chief executives’ 2011 pay far outweighed the 1 per cent average rise for their employees and came despite a 5 per cent fall in the FTSE 100 index, according to a report by proxy voting agency Manifest and remuneration consultancy MM&K.

A quarter of bosses trousered a massive pay rise of more than 41 per cent, with Barclays [bank] boss Bob Diamond top of the list of shame after securing total realisable remuneration of nearly £21m.

The report revealed that basic salaries of FTSE 100 chiefs rose 2.5 per cent but this was boosted by deferred bonuses and long-term awards.

The so-called “Shareholder Spring” has seen heads roll at a number of firms amid stockholders’ anger at executive pay.

TUC general secretary Brendan Barber said: “It seems there’s no danger that the same austerity which is causing such huge financial problems for ordinary workers is going to affect the pay of top directors any time soon.

“Proper reform which allows workers to sit on remuneration committees is more urgent now than ever.”

Business Secretary Vince Cable is drawing up plans to give greater power to shareholders but is understood to be considering diluting proposals for a binding annual vote in favour of a poll every three years.

Unite union leader Len McCluskey said: “Bosses are helping themselves to over-the-top pay rises and remuneration benefits, while employees, who make the business tick and become profitable, are told it is pay freezes and cuts for them and their families. Shareholders need legal and binding powers to rein in this profligacy.”

“There is no limit to the greed of the elite who run business and the City. The only mechanism that will curtail their take-home pay is the tax system,” he said.

“The Chancellor needs to reverse his decision to cut top-rate tax from 50 per cent to 45 per cent.”

The Office for National Statistics dealt a blow to those hoping Britain was moving out of recession as it revealed a 0.7 per cent drop in manufacturing output between March and April.

A quarter of Britain’s fattest cats have dumped millions of pounds into the Tory Party’s coffers, the GMB said today: here.

Barclays chief Bob Diamond was counting his luck today after his bank got away with a token punishment for its latest rate-rigging scandal: here.

Barclays chief Bob Diamond is set to be thrown back in the spotlight on Wednesday with another appearance before the Treasury select committee: here.

Britain: Reductions in child poverty are being reversed by the Tory-LibDem Coalition’s onslaught on welfare benefits, a report from the Child Poverty Action Group (CPAG) has warned: here.

3 thoughts on “Crisis, but not for British bosses”