Fortunately, there is not just torture, lethal tear gas, etc. etc. in Bahrain. 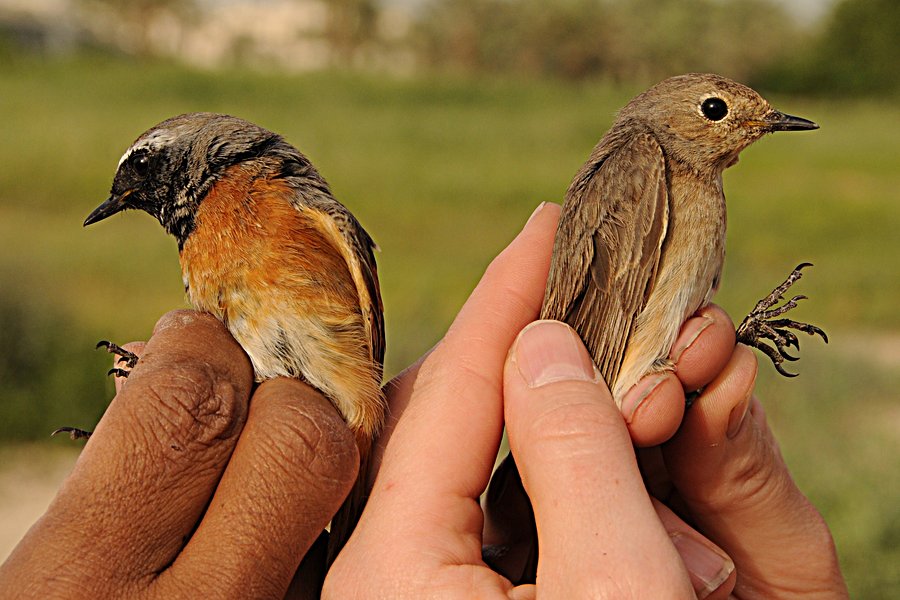 From Birds of Saudi Arabia blog, with more photos there:

We went ringing at Al Ali Farm in the afternoon last weekend. I had only been ringing at this site once before and it looks like a great site. There are plenty of tall trees, shrubs and open fields and a lot of birds where about. In the trees we set three nets hoping to catch Rufous-tailed Scrub Robin and Common Redstart which were seen in good numbers as we were setting up the nets. We also hoped we could catch a few Ortolan buntings in the grass field as Brendan and Nicole had caught 21 birds there the weekend before in one attempt. As it turned out most of the Ortolan Buntings had moved on and plenty of House Sparrows were in the fields along with a number of Daurian Shrikes and Turkestan Shrikes. Abdulla came for an hour and hoped to catch a Lesser Grey Shrike that he had seen but it evaded the trap and was not caught. …

We caught a number of species that I had not ringed before and Nicole also ringed a few new species. The new ones for me were Rufous-tailed Scrub Robin, Common Redstart, Thrush Nightingale, Whinchat [see also here], Great Reed Warbler and Crested Lark. Nicoles new species were Great Reed Warbler, Upher’s Warbler and Red-backed Shrike. It was a really good afternoon’s ringing and there were plenty of birds to extract from the nets, with me getting almost all the shrikes to extract one of which was particularly aggressive, but no blood was drawn. …

8 thoughts on “Ringing birds in Bahrain”