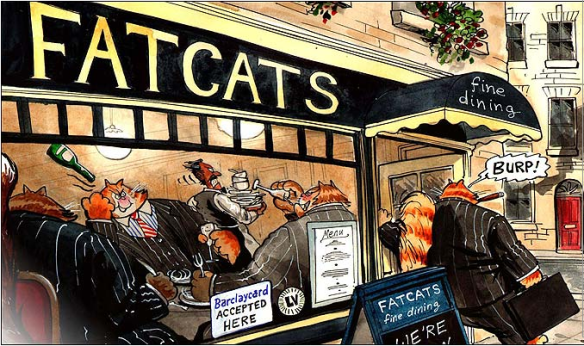 The English Blog says about this cartoon:

Following the news that two of Britain’s biggest banks have made multi-billion pound profits, several newspapers feature fat cat cartoons. This one’s by Andy Davey in The Sun.

We see a group of fat cats dining in a restaurant called, appropriately, Fatcats. There’s a sign in the window saying “Barclaycard accepted here”—a reference to the bank‘s bumper profits.

Britain: Ex-M&S boss Sir Stuart Rose who left the job he said he was “married to” with a £8.1 million golden goodbye backed work-for-nothing schemes for jobless youngsters today: here.

HSBC bank boss Stuart Gulliver was paid an incredible £13.70 for every minute of 2011 – and even then he didn’t take what he was entitled to: here.

Barclays has stoked the bank bonuses fire yet again by revealing that its boss Bob Diamond is in line for a multimillion-pound payout: here.

Barclays boss Bob Diamond is to pocket a £6.3 million pay packet for 2011 – sparking fury from a union leader today: here.

Filthy rich earners on over £150,000 a year are enjoying tax breaks worth more than the annual salaries of nearly eight million workers, experts warned today: here.

Britain 2012: Some families have only £2 per person per day for food: here.

Women bore the brunt today as the nation’s dole queue continued its relentless march towards the three million mark: here.

6 thoughts on “Crisis, but not for British fat cats”