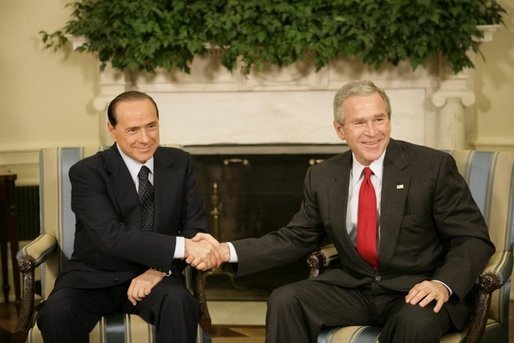 Clinton and Berlusconi patch up any Wikileaks problems

Secretary of state says US ‘has no better friend’

Rome, December 1 – United States Secretary of State Hillary Clinton and Italian Premier Silvio Berlusconi on Wednesday ironed out any differences which may have arisen from US diplomatic observations made public this week by Wikileaks with Clinton saying the US “has no better friend” than the premier. The two met on the sidelines of a summit in Astana, Kazakhstan, of the Organization for Security and Cooperation in Europe.

Among the thousands of confidential and secret diplomatic dispatches leaked by the whistle-blowing website were several from Italy, one in which Berlusconi was described as a “feckless, vain and ineffective European leader“.

He was also said to be “physically and politically weak” in part due to his “frequent late nights and hard partying which keep him from getting sufficient rest”.

In another document, a US diplomat claimed that Berlusconi was “increasingly becoming a mouthpiece for (Russian Prime Minister Vladimir) Putin in Europe” and the pair exchanged “lavish gifts”.

Concern was also expressed in the cables over an agreement between Italian fuels giant ENI and Russia’s Gazprom to build South Stream, a gigantic pipeline to link Russia and the EU by bypassing Ukraine. …

In their meeting on Wednesday, Clinton told Berlusconi “we have no better friend. No one has supported America the way Berlusconi has through the Clinton, Bush and Obama administrations”.

The situation for the Unites States government is truly sad if they have “no better friend” than Silvio Berlusconi, of sex parties with minors, of miniskirt banning, of eighteenth century art censorship, of media censorship, of xenophobia, of anti-Semitism, of homophobia, of sexism, of financial scandals, of mafia connections … Apparently, in the eyes of Ms Clinton, participating … or, rather, making your soldiers participate as cannon fodder in bloody wars like Iraq and Afghanistan, makes one a best friend, no matter how criminal one is.