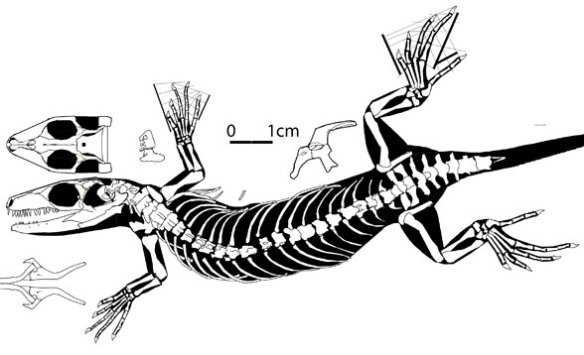 A 120-million-year-old fossil is the oldest pregnant lizard ever discovered, according to scientists.

The fossil, found in China, is a very complete 30cm (12in) lizard with more than a dozen embryos in its body.

Researchers from University College London, who studied the fossil, say it was just days from giving birth when it died and was buried during the Cretaceous period.

The team reports the findings in the journal Naturwissenschaften.

The fossil is especially interesting to scientists because it is a reptile that produced live young rather than laying eggs.

Only 20% of living lizards and snakes produce live young, and this shows it is an ancient, if unusual, trait.

“I didn’t think much of the fossil when I first saw it,” said Prof Susan Evans, joint lead author of the paper, from University College London.

But when her colleague, Yuan Wang, from the Chinese Academy of Sciences, examined the fossil he spotted the tiny remains of at least 15 almost fully developed embryos inside it.

“Sure enough, when I examined it under the microscope, I could see all these little babies,” Prof Evans recalled.

The fossil is so well preserved that the minuscule teeth of the developing young are visible on very close inspection.

“This specimen is the oldest pregnant lizard we have seen,” said Prof Evans. …

Up until now the fossil records only contained examples of marine lizards giving birth to live young.

Scientists thought that, in extinct reptiles, live birth was restricted to aquatic species, such as marine ichthyosaurs. These creatures would have been able to move through water with relative ease, even when heavily pregnant.

Prof Evans said: “We do know that this lizard lived near to water and we think it likely that they could swim even though they primarily lived on land.

“This would make sense as a pregnant lizard would be less constrained by carrying offspring – she’d be able to escape into water if a hungry dinosaur came along.”

The fossil comes from world famous rocks of the Jehol Group in north-eastern China, where the fine limestone there has been worn away to gradually reveal hundreds of exquisite specimens of dinosaurs, but also fish, amphibians, reptiles, birds and mammals, plants and invertebrates.

The mother lizard has been identified as a specimen of Yabeinosaurus, a large, slow-growing and relatively primitive lizard.