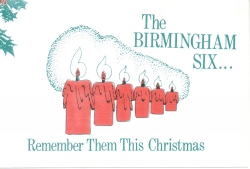 Politics, Protest And The Christmas Card

Peace campaigner Bruce Kent once wrote that “those working for a better future have always to build on past struggles.

“Previous efforts are never wasted and we need to be reminded of them”.

That just about sums up what this exhibition is all about.

It is not a history of the humble Christmas card, the first of which appeared in 1843 with messages described by one of their early designers as “unconsidered trifles.”

It is a record of many of the political and industrial struggles since that time in cards portraying the words and deeds of those who refused to remain silent in the face of injustice.

These “rebels” or “revolutionaries” were – and still are – seen as a threat to the established order. Yet they helped to mould our history when, too often, we are taught that the advances made were the result of the so called contributions of kings, queens and generals.

The actions of the “rebels” are reflected in the words of a 1920 Christmas card: “Be strong!/It matters not how deep entrenched the wrong/how hard the battle goes, the day how long/Faint not, fight on./Tomorrow comes the song.”

Similar sentiments applied in an earlier Christmas card with an exhortation from the suffragettes to their brothers for “deeds, not words, who would be free himself must strike the first blow” and a card highlighting a hunger march by the south Wales miners in 1927.

The subject of poverty has not gone away and one of this year’s cards shows David Cameron asking Father Christmas whether the poor “deserve” presents.

Another features Cameron laughing and giving the thumbs-up sign as Nick Clegg as Father Christmas faces the wrath of a child – similar to that which he is currently experiencing from the electorate – who reminds him: “this isn’t what I asked for and it isn’t what you promised.”

The ridicule of the Tories and the Liberal Democrats is similar to the treatment meted out to new Labour, particularly Tony Blair. One card shows a poster for a “Labour Government Socialist Pantomime” with the ironic words “Sold Out” plastered across it.

It’s not surprising that the popular traditional message of peace and goodwill to all is reflected in cards showing opposition to wars from WWI to Iraq, which often also carry the traditional peace symbol of the dove or the CND logo.

A classic is the Morning Star card highlighting opposition to the arms trade and weapons of mass destruction, including Cruise and Trident missiles. It shows someone holding a placard with the words “No Cruise” another “No Trident.” Santa’s slogan is “Noel.”

The Daily Worker was in fact one of the most important contributors to the creation of such Christmas cards, particularly in the 1950s.

One castigating the ruling class quotes Charles Dickens: “I declare I never go into what is called ‘society’, but I am not a-weary of it … The more I see of its extraordinary conceit and its stupendous ignorance of what is passing out of doors, the more certain I am that it is approaching the period when, being incapable of reforming itself, it will have to submit to being reformed by others.”

The recent financial crisis also features and another Morning Star card by Martin Rowson includes a grasping banker with the words “Greed Is Good” prominent.

Most appropriately, given some of the problems and setbacks we have faced as a labour movement, one card shows Father Christmas with a placard stating “Proud To Be Socialist.”