In the Netherlands, there are about a hundred women wearing what is called in the media a ‘burqa’.

Overwhelmingly, these are Afghan women, who, during the 1980s came, mostly with their husbands, as refugees from the pro-Soviet government then in Afghanistan, to the Low Countries. In the families of these women, the view prevailed that the Kabul government of the pro-Soviet Union People’s Democratic Party of Afghanistan, should be overthrown violently in order to replace it with a government interpreting Islam in a harsh way, including against women’s rights (as it later became under the Taliban, and basically is now, under the Karzai government helped into office by George W Bush’s 2001 invasion).

Then, in the 1980s, no one in the Netherlands dreamt about yelling at those asylum seeking women: “Take off that burqa!” No politician proposed an “anti-burqa” law. The political Right, the allies of then United States president Ronald Reagan, saw Osama bin Laden, Mullah Omar, and other fanatically religious people fighting “godless communism” in Afghanistan as valuable allies of NATO’s “free world”, including the Netherlands. While the political Left said that refugees, of whatever religious or political hue, should not be harassed. 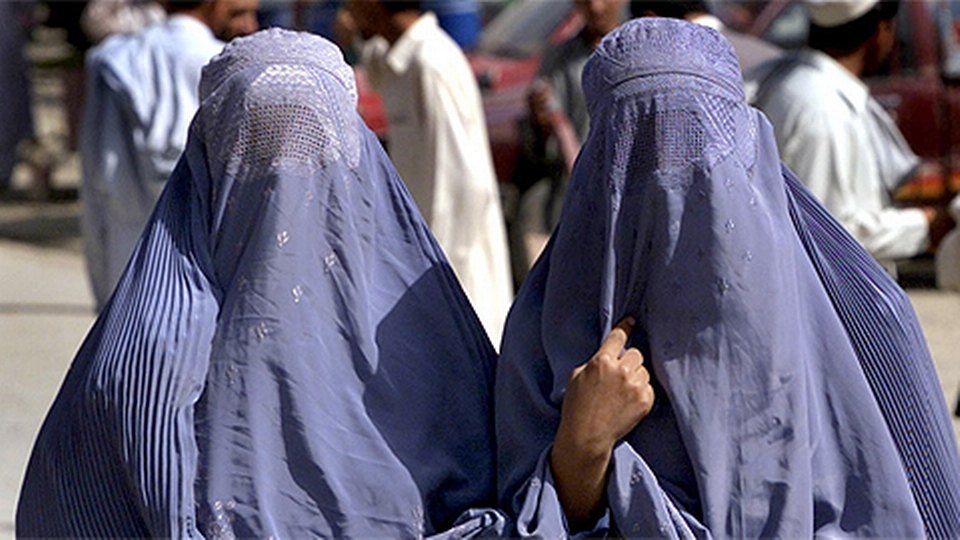 The maligned burqa is not a burqa at all

Leiden – European politicians are considering a burqa ban, almost daily newspapers print photos of Afghan women in pale blue burqas and a theater in Boekelo last week refused entry to a spectator in burqa. Striking detail: the offending garment is not a burqa at all.

“So much nonsense has been written,” says Dr. Gillian Vogelsang-Eastwood. As director of the Textile Research Centre (TRC) in Leiden, she set up an exhibition on traditional Afghan attire. It turns out that Afghan women do not wear burqas, which are stylish and relatively rare garments from Pakistan.

“The light blue robes with folds are chadaris. They are really something else.”

Almost all outsiders, Vogelsang-Eastwood claims, use the wrong name. The exhibition of the center, organized jointly with the University of Leiden, shows different types of face and body covering, garments put side by side. “Look,” says the British-Dutch scholar who for 25 years has done research on clothing and identity, “the Pakistani burqa is a cap, a face veil, a beautiful embroidered triangle on the breast and non-folded fabric around.” The decorated triangle can be folded to become a cap when the cap wearer wants to walk around with an uncovered face for some time.

The burqa was originally part of the dress code at the Mughal court in the Indian empire. The oldest version is from 1580, according to the researcher. “Hands off – this upper class lady is married,” was the garment’s message according to Vogelsang-Eastwood. Similar kinds of face veils, by the way, are pre-Islamic and already existed in 400 BCE.

The Afghan chadaris are from the 19th century and are simpler: a cap, a ruband (a decorated brisket combined with a face veil) and pleated fabric around that. Chadaris arose from Iranian influence. Even simpler are the Iranian chador (a hemispherically cut cloth) and the Afghan chadar (a square cloth). These have no face veils at all.

Vogelsang Eastwood: ‘There is much talk about the burqa, and there is even legislation being drafted to ban it. But everyone uses the wrong word. Isn’t that weird?!” Also, there is lots of simplistic writing on the function of the garment, she says. “Some Afghan women wear a chadari to emphasize their superiority.” According to the researcher, the deluxe versions of silk and cotton instead of polyester models from China are an interesting development. “Then you will need servants in order to constantly iron all those wrinkles into it.”

So, there probably are extremely few women in Western countries wearing a real (Pakistani upper class) burqa. Probably, these very few women are wives of Pakistani high level diplomats, rich businessmen, etc. The present anti-burqa legal measures (in Sarkozy’s France; proposed by the new Rightist Dutch government, etc.) are not directed against these few Pakistani privileged women. Ever since the 1950s, the Pakistani ruling class, military dictatorship or no military dictatorship, oppression of women or not, is an ally of the ruling classes of the NATO countries.

The anti-burqa measures are also not really aimed at the small numbers of Afghan refugee women wearing, not real burqas, but Afghan chadaris. As we said, these women are about 100 in the Netherlands; maybe a few hundred more in a bigger country like France. Not even the most demagogic Islamophobe could make a credible case about the horrible dangers of “Islamization” out of such small numbers.

The anti-burqa laws are about intimidating the much bigger numbers of women wearing, not burqas, not Afghan chadaris, but other, less conspicuous, clothes rightly or wrongly considered “Islamic”, like headscarves. No, the aim of those laws is even wider: it is also to intimidate the big numbers of women, originally from Turkey, Morocco, as refugees from Bush’s wars in Iraq, Afghanistan, Somalia, etc. who do not even wear headscarves. No, I should say, the aim is still wider: it is to intimidate the whole working class, “autochthonous” or “allochtonous” and to divide it along sectarian religious lines. A divided, intimidated working class, Rightists like Sarkozy calculate, would make it easier to take lots of money away from not so well off people and give it to extremely well off people like corrupt businesswoman Ms Bettencourt who finances corrupt Sarkozy and his corrupt political party.

‘Burqa’ banning politicians like Sarkozy basically are just as anti-women as Afghan warlords making chadaris mandatory. Both sets of misogynists deny women their rights to decide themselves whether they want to wear a miniskirt, a maxiskirt, trousers, a chadari, or whatever. Both say: “That is not her business. That is my business!”

The Wikipedia article “Burqa”, strangely, has nothing about Pakistan, the homeland of the real burqa. It does mention that also some extremely religious Israeli Jewish women wear ‘burqas’. Wikipedia does not say whether those “Israeli burqas” are real burqas or Afghan-style chadaris.

I do hope anti-Semites are too stupid to find that Wikipedia item, or this blog. That we now have a witch-hunt against Muslim women “because” a small minority of them wear chadaris is horrible enough. Only moronic admirers of Adolf Hitler need another anti-Jewish witch-hunt, this time “justified” “because” a small minority of Jewish women wear face veils, on top of that.

Calls for a ban on the burqa help the racists: here.

60 thoughts on “Banned ‘burqa’ not a burqa at all”