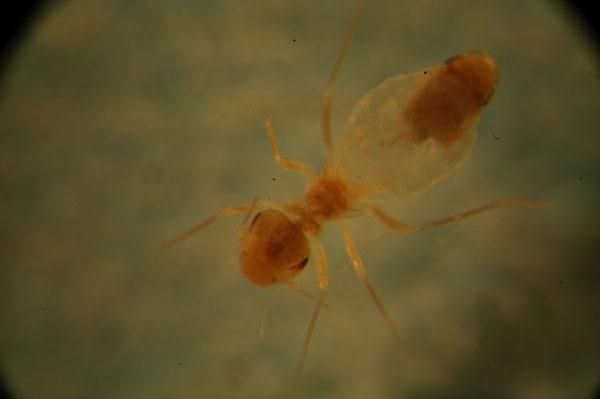 Scientists recently uncovered a new species of tiny insect in a cave on Easter Island. The find is exciting because most of the island’s native life has gone extinct, researchers said.

The still-unnamed insect was discovered in a cave within the Roiho lava flow in west-central Easter Island (also known as Rapa Nui) in the South Pacific Ocean. The species – roughly the size of a grain of rice – is a type of book louse, in the order Psocoptera, the family Lepidopsocidae and the genus Cyptophania.

The Polynesian island is famous for its hundreds of huge statues called moai, and for its tumultuous history.

In the 19th century, the slave trade and introduced European diseases decimated much of the indigenous human population.

The environment, too, has suffered from large-scale farming and the introduction of non-native species such as rats that flourished and devoured indigenous creatures. …

“This was once a tropical island with tropical vegetation,” Wynne told OurAmazingPlanet. “Now it basically looks like Scotland. We’re talking about an environment that has been completely transformed” from forest to grassland.

Almost all of the organisms currently living on Easter Island are invasive species that have been introduced, Wynne said.

Hiding out in caves

But the scientists think some native creatures may have had better luck in the relatively protected environments of caves, which preserve some elements of the native ecosystem of the island.

The researchers embarked on a quest to search through these caves, “scrambling around on our hands and knees,” Wynne said. After a while he began to notice promising signs.

“Once you’re trained to look for these types of critters, they tend to jump out at you,” Wynne said.

The new booklouse species was the first such example discovered, but the researchers think there’s a good chance their work will find more.

“That’s why this is really interesting from a scientific standpoint,” Wynne said. “Maybe we can find more organisms that are residual fauna that have been able to weather the environmental degradation on the island by retreating to caves.”

However, the scientists cannot yet be sure that the new species is actually native to Easter Island. It may also be an introduced species from somewhere else in Polynesia, perhaps, that has just not been catalogued elsewhere before.