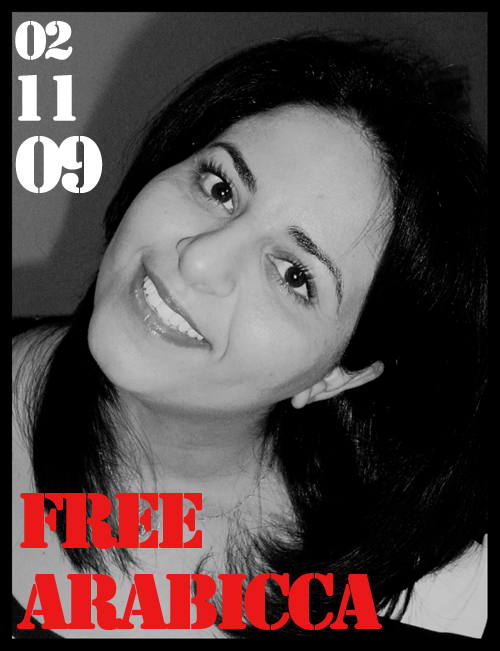 Riahi has reportedly not been released, nor granted access to her lawyer who is unaware of the charges

A Tunisian blogger and drama teacher, Fatma Riahi, known online as Arabicca, has been arrested by the country’s police, Al Jazeera has learned.

Riahi was summoned to appear before the Criminal Brigade of Gorjani in Tunis on Monday, where she was questioned about her online activities, sources said.

Riahi was then released in the evening, only to be summoned again the following day and escorted by police officers to her home in Monastir, 160km from the capital, Tunis, for a house-search, the sources said.

Police confiscated her computer as evidence, and gained access to her online social-network accounts.

Riahi has neither been released from custody in Gorjani police station, nor granted access to her lawyer, Laila Ben Debba, who has spoken to her only for a few minutes, Al Jazeera has learned.

If prosecuted, Riahi could face criminal defamation charges that potentially carry a prison term of to up to three years.

Authorities are investigating whether Riahi is hiding behind the pen-name of Blog de Z, a controversial Tunisian cartoonist blogger whose political satire has enraged the government.

RSF said on Friday: “Since her arrest, Fatma’s rights have been violated. The Tunisian authorities are using the pretext of her arrest in an attempt to discover the identity of anonymous Tunisian bloggers.

“We demand the authorities drop the charges against Fatma Arabicca and release her immediately.”

Lina Ben Mhenni, a friend of Riahi, told the Los Angeles Times in an email on Friday: “We talked about the Criminal Brigade [summoning] her, her worries, but we were optimistic as we know that she didn’t do something wrong.”

A “Free Arabicca” campaign blog has been launched by fellow Tunisian bloggers in support for Riahi, as well as a facebook page.

Zouhair Yahyaoui, one of Tunisia’s most famous imprisoned former bloggers, was arrested in 2000 after inviting readers to vote on whether Tunisia was a “republic, a kingdom, a zoo or a prison”.

Yahyaoui died of a heart attack in 2003 after reportedly being severely tortured.

In another development, France voiced concern on Friday over the fate of a Tunisian journalist and vocal critic of Zine El Abidine Ben Ali, the Tunisian president, who was arrested last week for allegedly assaulting a woman and faces trial.

Taoufik Ben Brik was detained on October 29 and is being held in a town outside Tunis pending trial later this month.

RSF said in a statement last week that the charges were bogus and that Ben Brik was too ill to stand trial.