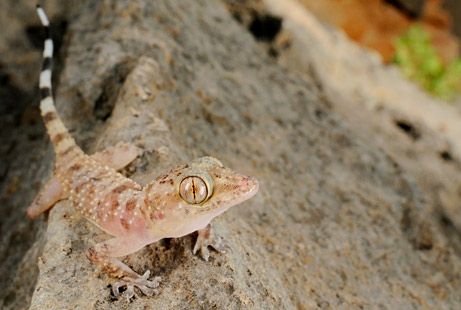 September 24, 2009—After millions of years of obscurity, this little gecko is finally getting some respect, thanks to a new study.

Newly identified as its own species, the tiny pinkish-brown gecko, which scurries through rocky habitat on the Arabian Sea island of Socotra, was long thought to be another kind of gecko.

“That’s why we chose to call it the Latin word for ‘misunderstood,'” said study co-author Fabio Pupin.

During field surveys between 2007 and 2009, Pupin and colleagues had observed and collected several of the roughly two-inch-long (five-centimeter-long) geckos.

The team then compared H. initellectus’ genetics and physical appearance with those of similar gecko species, including some museum specimens. The gecko turned out to be unique—large nodules on its back, for example, set the lizard apart. The team reports its findings in the September issue of the journal Acta Herpetologica.

The newly named, nocturnal lizard adds to the “incredible” uniqueness of the Yemeni island, where 95 percent of the native reptiles are found nowhere else on Earth, said Pupin, an ecologist at the University of Pavia in Italy.

Situated between Somalia and Yemen, the 62-mile-long (100-kilometer-long) island is like “a desert in the middle of the ocean,” he said. Six million years of isolation from the mainland—and little competition—has allowed Galápagos-like diversity to flourish.

Though H. initellectus is a common sight on Socotra, some of the island‘s other wild animals and plants may be threatened by goats and other animals kept by a booming human population, said Pupin, who hopes news of the misunderstood gecko will lead to greater understanding of the need for conservation.

“When you discover a new species, you show to all the people how great nature is,” he said. “If we don’t know what we have in our planet, we cannot protect it.”

The ‘lost world’ of Socotra, a remote island with plants up to 20 MILLION years old. Read more: here.