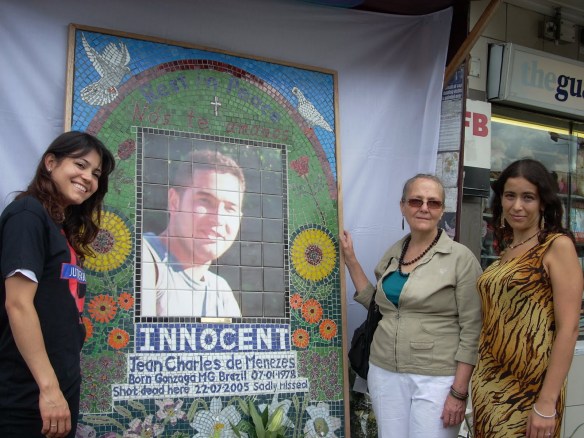 Grieving relatives have unveiled a colourful mosaic picture of Jean Charles de Menezes at a ceremony marking the fourth anniversary of his murder.

After more than a year of trying to get a response from Transport for London, the Justice for Jean Charles de Menezes Campaign has also launched an online petition called Never Forget.

The campaign calls on the public and London Mayor Boris Johnson to support the permanent placing of the memorial outside Stockwell Tube station in London, where Mr de Menezes was shot dead by police.

His family hope that the mosaic will replace the shrine of candles, flowers, pictures and newspaper articles that have been placed there since police marksmen fatally mistook the 27-year-old Brazilian for a suicide bomber in 2005.

Leading Menezes family campaign member Asad Rehman said supporters also want to meet Mr Johnson in the near future to ensure the shooting is not forgotten.

“It’s a memorial not only to the memory of Jean but a testament to the struggle of an ordinary family in London, a struggle for truth and justice,” he said.

Mr de Menezes’ cousin Vivian Figueirdo, who helped to create the artwork under the instruction of Stockwell artist Mary Edwards, was joined at the ceremony by family members including cousins Patricia da Silva Armani and Alex Pereira.

Ms Figueirdo said: “We think there should be something permanent because it has to be cared for. We want something to stay forever and Mary had the idea of making a mosaic.”

She added: “”It is unbelievable that it is four years since this happened. We have been through all the steps we can to try and fight for justice.”