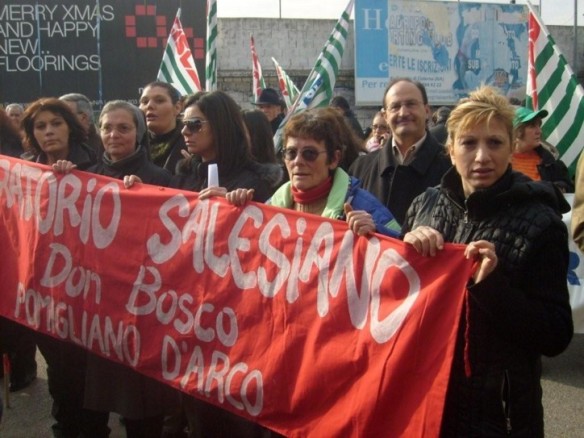 Palermo, May 14 – Workers at Fiat’s Sicilian plant in Termini Imerese on Thursday continued their temporary work stoppages to protest uncertainty over the factory’s future.

Meanwhile, unions at other Fiat factories met to consider other labor actions, including a refusal to work overtime, to draw attention to the fact that they feel left in the dark about Fiat’s global expansion plans and the effect these will have on jobs in Italy.

Fiat has already negotiated a partnership deal to become a controlling partner in the American automaker Chrysler, but it is its proposed merger with Opel, the main marque in General Motors’ European arm, which has unions in Italy and Germany worried.

Plans allegedly drawn up by Fiat, but which CEO Sergio Marchionne has not confirmed, indicated the shutting down or ‘reorientation’ of Termini Imerese and another plant in Italy, which many believe will be Pomigliano d’Arco near Naples, while an Opel engine and parts plant in Germany also risks being shut down or seeing its work force drastically reduced.

According to union sources at Opel, some 18,000 workers risk losing their jobs in Germany and Italy if the merger goes through.

GM must at least find a partner for its European arm, which includes Saab of Sweden, before the end of the month in order to receive federal bail-out funds. Workers at Termini Imerese staged two 90-minute work stoppages on Thursday morning and blocked a local highway to draw attention to their protest.

Unions at the Sicilian plant said they wanted an immediate meeting with the regional government.

In Turin, where Fiat has its headquarters, union meetings at the automaker’s plants discussed a number of non-strike actions, including work-to-rule and a refusal to do overtime, as a means to force Fiat into giving details on its expansion plans.

”These forms of labor action are a legitimate form of persuasion to open a three-way talks between us, Fiat management and the government in Rome,” explained Gianni Rinaldi, secretary general of the FIOM union.

”If in the coming days we’re not invited to meet with the government and Fiat, we will have to resort to labor initiatives to force a meeting, like refusing overtime. At the moment calling a strike is not under consideration, ” said Eros Panicali, a UILM union chief.

Fiat on Wednesday asked some 800 workers on the first shift at the Mirafiori chassis plant in Turin to work a six-day week six week starting May 23 to meet an upsurge in demand.

According to Giorgio Airaudo, secretary general of FIOM’s Turin chapter, ”Fiat’s workers in Italy want to work, but you can’t expect them to do everything asked unless they are given some assurances about their future”.

”It is also wrong to try and pit workers at one factory against those of another, just as it is wrong to try and divide workers in the same plant by linking threats of layoffs to readiness to do overtime,” he added.