This video, in Dutch, is about the synagogue in Paramaribo. Originally, there were two synagogues: one Sephardic (the earliest Jewish community in Suriname, originally from the Iberic peninsula) and one for the Ashkenazim, who arrived later, in the nineteenth century, from central Europe. However, in the twentieth century, like many others in Suriname, many Jews emigrated. So, two synagogues were no longer viable, and the former Sephardic synagogue is now a computer business.

In Paramaribo, the synagogue stands next to the mosque; making the capital of Suriname unique in the world. This is a symbol of the good relationship between Jews and Muslims here. 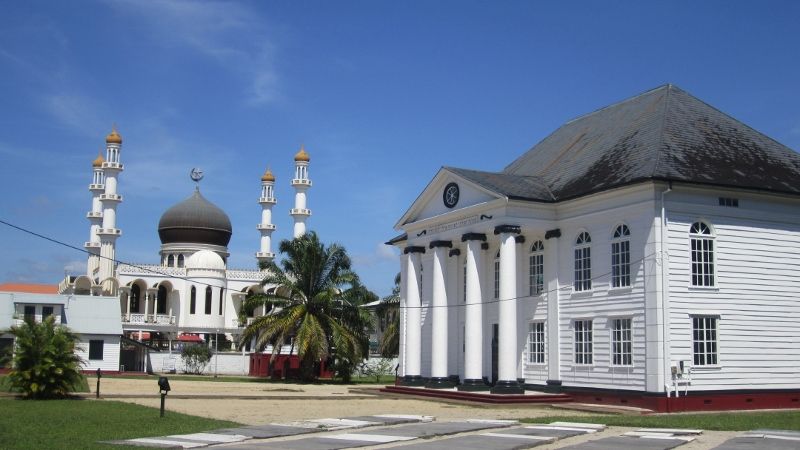 A Jewish woman stands in front of the two buildings. She married a Muslim. Their children get education both about Judaism and Islam.

A Surinamese woman in Leonsberg had told us that her siblings live in The Hague, Rotterdam, elsewhere in the Netherlands … “I am the only one still living here”. As noted, that also goes for the Jewish community, now only 155 people. The mosque next to the synagogue is doing better in this, as it has 17,000 members.

The two communities are more similar in the position of women. Recently, lobbying by Jewish women has resulted in allowing women to worship in the same room as men in the synagogue. In the mosque, that had already been made possible earlier. The mosque is owned by the Suriname Islamic Society; rather liberal Muslims. In some other mosques, the situation is not as liberal.

Also in de Hindu temple Arya Dewaker, women have made some progress. A note at the front gate announces sermons, not only by male pandits, but by female panditas as well. A gecko climbs a wall near the back entrance.

As for Christianity: during slavery, the Reformed Church was the church of the white slave owners, ideologically propping up master-slave inequality. However, today an African-Surinamese woman is the local vicar in Paramaribo.

USA: THE CAMPAIGN FOR WOMEN-FRIENDLY MOSQUES “Whenever Muslim feminist Hind Makki sees photos of a stunning mosque, she wonders, ‘Would there be an adequate place for me to pray?’ For years, Muslim women activists like Makki have been calling attention to the state of women’s prayer spaces in mosques. There’s an incredible variety in America — some mosques have beautiful prayer halls for women, while in other mosques, women are relegated to crowded basements or asked to watch the service on television from an overflow room.” [HuffPost]

5 thoughts on “Surinamese women and religions”