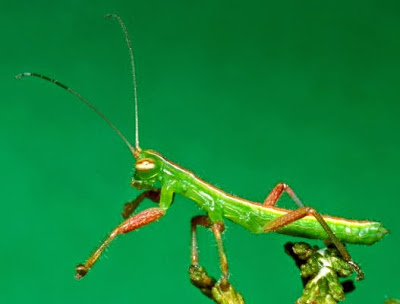 From The Mercury daily in South Africa:

Seven years since the discovery of the shy “heelwalkers“, entomologists still have conflicting views about whether the stick insect is the creature’s closest relative.

This is according to South African entomologist Mike Picker, who spoke to the media on the first day of the 32nd International Congress of Entomology in Durban on Monday.

“Discussions about the relatives of this insect have been controversial. While some entomologists believe the insect is related to the praying mantis, others believe its closest family is the stick insect, or the insects known as ice crawlers.

“But we do know that it is not a close relative of the praying mantis, and only has superficial similarities to the mantis,” he said.

The Mantospasmodea [sic; Mantophasmatodea], commonly known as “heelwalkers” because of their unique way of walking with their “toes” up in the air, were discovered in 2002.

It was the first discovery of a new insect order since 1914. Specimens of the creature had been found and collected as early as the 1890s, but were left in museum drawers and mistakenly thought to be immature praying mantises. The creatures have only been found in the Cape provinces, Namibia and once in Tanzania.

Picker said much research had been conducted on the insect since its discovery.

“We have an international team of people, including myself, that have been working on these insects. We know these creatures are nocturnal predators that eat small insects.

“Their mating periods last for up to two days, and thereafter the female eats the male.”

Picker said the insects were one to two centimetres long, and did not have wings. The female and males communicated using vibrational communication, tapping their abdomens on the ground.

Picker said that about 20 species of the insect had been identified, 11 of them in South Africa. “This is just the tip of the iceberg. We expect to discover more species as we go about our research,” he said.