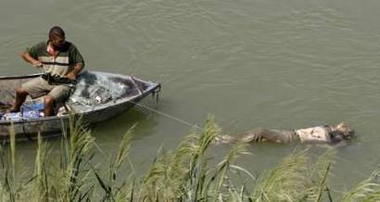 BAGHDAD – The River Tigris has long been a symbol of prosperity in Iraq but since the US-led invasion in 2003, this amazing watercourse has turned into a graveyard of bodies.

In addition, the water level is decreasing as pollution increases, say environmentalists.

Pollution in the river is caused by oil derivatives and industrial waste as well as Iraqi and US military waste, they say.

The river was one of the main sources of water, food, transport and recreation for the local population but after four years of war and pollution, it has been transformed into a stagnant sewer, according to environmentalists.

Fishermen are prohibited from fishing where the river passes through the capital and all vessels are banned in the area.

“The situation is critical. The river is gradually being destroyed and there are no projects to prevent its destruction,” said Professor Ratib Mufid, an environment expert at Baghdad University.

“A large part of the river has been turned into a military area, forcing families to leave their homes around the riverbanks and close restaurants.

Fishermen are prohibited from fishing where the river passes through the capital and all vessels are banned in the area,” Mufid said.

The river is contaminated with war waste and toxins, and residents of the impoverished Sadr City suburb are often left with no alternative but to drink contaminated water from the Tigris.

This is why, specialists say, many Sadr City residents are plagued by diarrhea and suffer from recurring kidney stones.

In the hot dry summer months, when the water level drops, mud islands can be seen, and water levels appear to be decreasing every year.

“The problem of decreasing water flow starts in Turkey’s Taurus mountains. Between there and Kurdistan, many dams have been built which help to decrease the water flow.

The idea [of dam-building] was to prevent floods which over the years affected northern communities, but the consequence can now be seen with nearly half the previous water flow,” Seif Barakah, media officer for the Ministry of Environment, said.

Military forces have banned shipping and fishing in the river, and many families who depend for their income on fishing have been deprived of their means of survival.

Every day local police haul bodies from the Tigris bearing signs of torture. Locals who live near the river constantly see floating bodies.

The situation is even worse in Suwayrah, a southern area of the capital, where the government has built barriers with huge iron nets to trap plants and garbage dropped in the river but now this is also a barrier for bodies.

“Since January 2006 at least 800 bodies have been dragged from those iron nets, and this figure does not include those collected from the central section of the river.

Most of the bodies are unidentified and buried without family claims,” said Col Abdel-Waheed Azzam, a senior officer in the investigation department of the Ministry of Interior.

According to Azzam, 90 percent of the bodies found in the river show signs of serious torture.

“Because of the state of the bodies, it is not useful to try to have an autopsy done, and if the bodies are not claimed within 24 hours they are automatically buried,” he said.

During Saddam Hussein’s regime people caught dumping garbage in the river were punished, but today mountains of rubbish can be seen on the riverbanks; and these affect the normal watercourse and pollute the area.

“With dams decreasing the water flow, the salt level rises and in conjunction with the high level of pollutants dumped in the river by northern cities, this reduces oxygen levels, making an unpropitious environment for any living being,” Barakah said.

Fishermen said that years ago it was easy to catch a fish in the river but today even if you use nets it is practically impossible to catch a fish and many can be found floating, having died of pollution and lack of oxygen.

“Today, the only fish you can catch are those floating and which died from pollution after ingesting toxic waste and eating rubbish,” said Ateif Fahi, 56, a fisherman in the capital, Baghdad.