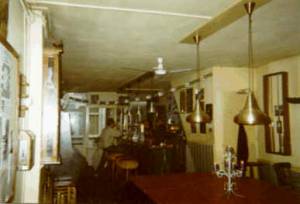 There was a poetry night in Café Briljant Haarlem on 25 april.

More or less a poetry slam, though not called so officially.

There were five poets.

There were two rounds, in which all poets had four minutes each time to read their poems.

The order of poets was different in both rounds.

The poets were A.C.G. Vianen, winner of an earlier poetry slam in Utrecht; Pandorra; Paul Roelofsen from Koedijk village.

And yours truly, with poems about a ladybug, Princess Mabel, an umbrella, seasons, a window, colours, horses, and soccer.

The jury liked especially my poems on Sadr city in Baghdad, Iraq; and on togetherness.

Someone in the audience who wanted to go the demonstrations against the G8 meeting in Germany this summer liked especially my poem about Berlusconi and the death of Carlo Giuliani in Genoa in Italy in 2001.

The jury decided that A.C.G. Vianen was the winner.