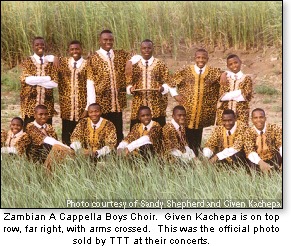 Zambian: ‘I was a captive choirboy’

By Rob Reynolds in Dallas

Two hundred years since slavery was abolished in Britain [no, the British trans Atlantic slave trade was abolished then], a Zambian is trying to draw attention to the modern day trade in human beings.

Captured by rogue missionaries, Given Kachepa, was brought as a boy from his home in Africa to the United States and made to sing in a choir to make money for his captors.

Now, Kachepa is a young man with a mission: to put an end to modern day slavery.

“I’ve made it a goal of mine to do anything I can to fight human trafficking”, he told Al Jazeera.

He said his message to people who don’t believe slavery still exists is “look at me”, he says.

Growing up an orphan living in crushing poverty in Zambia, Kachepa was taken to the United States at the age of 11 after his family were told that he would be given an American education while raising money for good causes.

He was part of a Zambian Boys Choir that performed for churches and Christian organizations all over the US.

Kachepa said: “We sung four to seven concerts a day, going to churches and schools, parks, any avenue we could find to sing.

“And the advertisement was we are building schools in Africa. So people were willing to give a lot of money.”

The group’s organiser, an American preacher named Keith Grimes, promised the choirboys the money they raised would go to build schools and help their families in Zambia, and their educations would be paid for.

But it was all a lie – the money, estimated at over a million dollars, was never used for those purposes.

Kachepa had become caught up in the modern day trans-national slave trade – a global criminal enterprise that touches virtually every country on earth.

The UN and US State Department estimate 800,000 slaves are trafficked every year.

6 thoughts on “Zambian, ex slave of US religious businessman, tells his story”