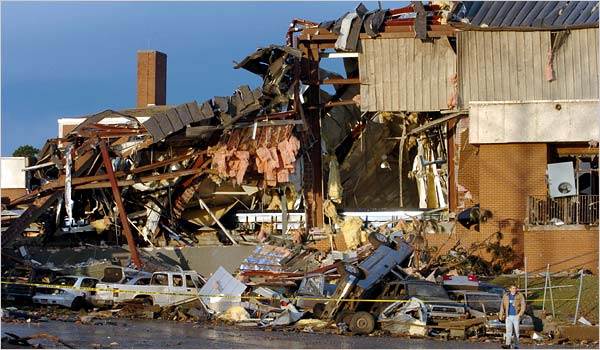 BUSH REFUSES TO AID VICTIMS OF ALABAMA AND GEORGIA TORNADOES

THE AFL-CIO US trade union federation has condemned President Bush for his lack of any action in support of the victims of the recent tornadoes in Alabama and Georgia.

Its statement said: ‘In the play “A Streetcar Named Desire,” the heroine Blanche DuBois says: “Whoever you are, I have always depended on the kindness of strangers.”

‘President Bush seems to hope there are lots of kind strangers out there to help the victims of the tornadoes that ripped through Alabama and Georgia last week – because his government certainly won’t.

‘While saying help is on the way, Bush told residents of Americus, Ga., to “hang in there,” and urged generous Americans to donate money to help.

He said some of our poor citizens “may or may not qualify” for federal aid and “they are going to need the help of their fellow citizens.”

‘The fact that the most vulnerable survivors cannot expect help from the Bush administration sounds like more of the same to residents of New Orleans, who are still trying to get real federal help 19 months after their homes, jobs and lives were devastated by Hurricanes Katrina and Rita.

Bush prefers to spend money on the war in Iraq; which the AFL-CIO states it opposes.