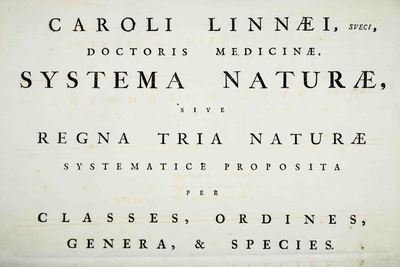 From the Swedish tourist site:

Back in the 1730s the Swedish botanist, Linnaeus [born in 1707, so three hundred years ago next year], invented an accurate system – still used to this day – to simplify the scientific categorisation of plants and animals.

With two Latin names for each animal and plant species, his method is employed worldwide to promote communication between botanists, gardeners, zoologists and birdwatchers.

Well, after three hundred years of science, Linnaeus’ System of Nature is of not course not used exactly as he designed it then any more.

In the systemic part of the botanical garden, there is now a sculpture of Linnaeus; but also plant beds and signs indicating that DNA and other recent research have found that many plants which Linnaeus and later botanists thought were related, are not related; while plants he thought were unrelated, are in fact related.

However, Linnaeus’ idea of one Latin genus name plus one species name still stands.

It made things much easier for biologists since pre-Linnaeus times, when about every author about nature promoted his own nomenclature.

He did not draw the conclusion from this that species may evolve from common ancestors (which would have upset many eighteenth century Christian believers; Linnaeus was one himself).

That would mainly be done by nineteenth century scientists like Charles Darwin (see also here).

Still, one might say Linnaeus played a part in preparing the ground for the idea of evolution.

Herpetology, of course, owes as much to (and struggles as much under) the legacy of Carl Linnaeus as any other life science discipline.

This is yet another irony, for Linnaeus hated amphibians and reptiles with a passion (“Terrible are Thy works, O Lord!”, he says of them).

Linnaeus defined the class Amphibia in his famous “Systema Naturae”, but his conception of the group included reptiles and cartilaginous fishes in addition to the amphibians as we recognize them today.