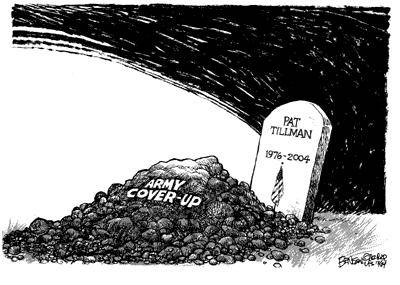 The brother of professional athlete turned soldier Pat Tillman, who was killed in a “friendly fire” incident in Afghanistan, has made a public denunciation of the wars in Iraq and Afghanistan and the Bush administration’s attacks on democratic rights.

Kevin Tillman enlisted in the military along with his brother after the 9/11 terror attacks.

Pat Tillman’s decision to give up his lucrative career as a National Football League player and join the military was heavily publicized at the time as an example of popular support for the Bush administration’s “war on terror.”

Kevin and Pat served a tour of duty in Iraq, then were accepted into the elite Army Rangers and sent to Afghanistan.

In April 2004, Pat was killed by his fellow soldiers after his unit was divided and the two groups of soldiers blundered into each other and opened fire.

Although he was in the same unit, Kevin did not witness his brother’s death and was initially told, like the American public as a whole, that Pat died heroically in combat with Taliban fighters.

It was only months later that Kevin and the rest of the Tillman family learned that Pat’s death was due to friendly fire, and the Army began an investigation into his death and the subsequent cover-up which is still not concluded.

It is clear that in the year since he left the Army, Kevin Tillman has done some serious thinking about the nature of the Bush administration and its wars.

His statement is the most scathing attack on the war to be acknowledged by the American media, although only a few fragments of sentences were published.

The entire statement was published on the TruthDig web site.