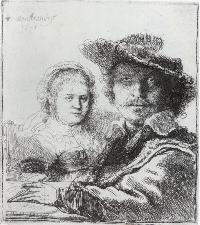 Today, an afternoon in honour of famous painter Rembrandt in Sidac art gallery.

Many graphic works by contemporary artists, inspired by Rembrandt, were exhibited.

Also poems on Rembrandt hung on one of the walls, by several poets.

Including me, and Peter van den Berg. He had written that Rembrandt’s paintings survive safely.

However, there is a problem with his drawings.

Many old drawings, from the eighth to the twentieth century, including Rembrandt’s, were made with gaul nut ink, or iron-gallus ink.

These ultimately destroy paper and the drawings on it.

Teyler’s Museum in Haarlem in The Netherlands is working at a method to fight this.

At the end of Peter van den Berg’s poem, all the letters of Rembrandt’s name fell away, till just one r was left.

He, I, and other poets also read their poems on Rembrandt and other subjects (including hurricane Katrina in the USA).

Of my poems, one on a carp was liked best, especially by a woman whose son was an enthusiastic angler.

In between, Adriaan Bos played guitar and sang.

When we left, the gallery owner gave us grapes grown on her balcony, which she could not eat herself as she would be going on holiday.