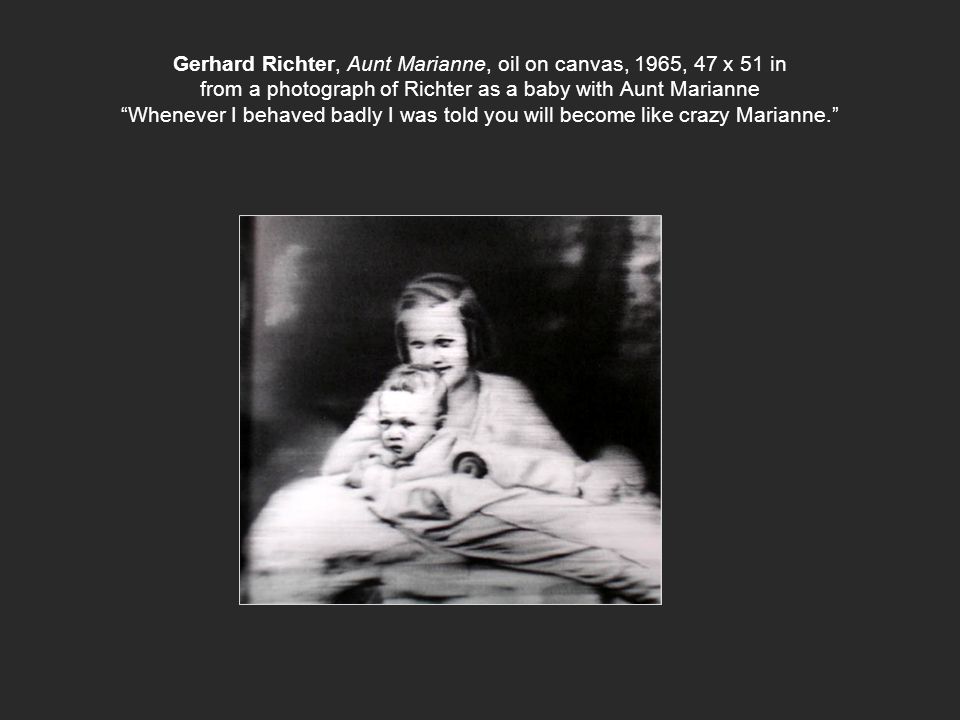 Germans dismayed over sale of painting

Germany reacted with dismay on Thursday after a painting by the country’s most famous living artist, revealing his family’s tragic history under the Nazis, was sold to an overseas buyer.

Based on a photo taken in June 1932, the painting shows the artist as a four-month-old boy sitting in the lap of his 14-year-old aunt.

The photo-realist painting appears to resemble nothing more than an innocent Sunday afternoon snap taken in the family back garden.

But, in fact, it encapsulates Marianne’s fate as one of 250,000 people killed under a forgotten euthanasia programme linked to Richter’s own father-in-law.

Richter painted the haunting work in 1965 without knowing the details of his aunt’s death.

It was only when the writer Jürgen Schreiber began researching the artist’s biography that the truth emerged.

Six years after the photo was taken, Marianne, a schizophrenic, was forcibly sterilized.

In the final months of World War II the Nazis admitted her to a psychiatric hospital where she and other inmates were deliberately starved to death.

She and 8,000 other patients were dumped in a mass grave.

Richter’s father-in-law, Heinrich Eufinger, was an SS doctor responsible for carrying out the forced sterilization of the mentally ill, and although Schreiber never found firm proof, it seems that Dr Eufinger who appears in several of the artist’s works may have personally sterilized Aunt Marianne.

Richter, now 74 and living in Cologne, has said he is unconcerned with the fuss surrounding the painting.

It was sold to a private Asian buyer at a Sotheby’s auction in London.

Hans Asperger, the doctor for whom a form of autism is named, allegedly “aided Nazi child euthanasia.”